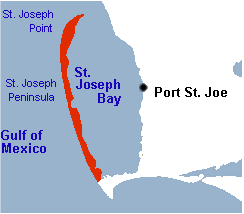 The Spanish named the bay Bahía de San José early in the 16th century, but did not occupy or exploit the area through the 17th century. In 1701 they built a fortification, the Presidio Bahía de San José de Valladeres, on the mainland opposite St. Joseph Point, with a lookout post on the point, but left two years later. In 1718, during the War of the Quadruple Alliance, the French invaded St. Joseph Bay and established Fort Crevecouer on the shores of St. Joseph Bay opposite St. Joseph Point. The Spanish in turn sent 800 men to retake St. Joseph Bay. After pushing the French out of the area in 1719, the Presidio Bahía de San José de Nueva Asturias was established on St. Joseph Point. With the loss of Pensacola to France that year, the new presidio was designated the capital of the newly created Province of the Principality of Nueva Asturias. The presidio, with about 2,000 inhabitants, lasted until 1722, when the post was moved to Presidio Isla Santa Rosa Punta de Siguenza near Pensacola on Santa Rosa Island.

The St. Joseph Bay Light was established on St. Joseph Point in 1838 to serve the new town of St. Joseph on the eastern shore of the bay. The light was discontinued in 1847, after the town had been abandoned, and the unused tower was destroyed in a storm in 1851.

All content from Kiddle encyclopedia articles (including the article images and facts) can be freely used under Attribution-ShareAlike license, unless stated otherwise. Cite this article:
St. Joseph Peninsula Facts for Kids. Kiddle Encyclopedia.