Gulf County is a county located in the panhandle of the U.S. state of Florida. As of the 2010 census, the population was 15,863. Its county seat is Port St. Joe.

Gulf County, created in 1925, was named for the Gulf of Mexico. Wewahitchka was its first county seat and the 1927 Gulf County Courthouse is still in existence. In 1965 the county seat was moved to Port Saint Joe, which under its original name Saint Joseph, had been the site of Florida's first Constitutional Convention in 1838. 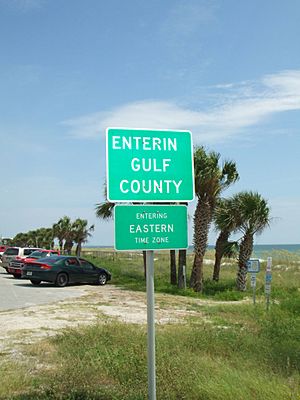 By way of the Intracoastal Waterway, Gulf County is one of a small number of counties in the United States to be under two time zones, Eastern and Central in this case.

Gulf County is part of the Northwest Regional Library System (NWRLS), which serves Bay and Liberty Counties as well.

All content from Kiddle encyclopedia articles (including the article images and facts) can be freely used under Attribution-ShareAlike license, unless stated otherwise. Cite this article:
Gulf County, Florida Facts for Kids. Kiddle Encyclopedia.