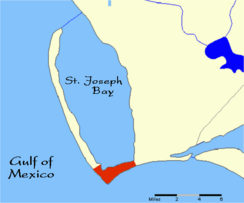 Cape San Blas was home to a Confederate Saltworks where 150 bushels of salt a day were processed by evaporation of seawater. This halted in 1862 when a landing party from the Union ship, the USS Kingfisher, destroyed the saltworks.

Cape San Blas has had 4 lighthouses. The first, built in 1847, collapsed during a gale on August 23–24 of 1851. Congress appropriated $12,000 for a second brick tower lighthouse for the cape which was finally finished in November 1855, but it was destroyed on August 30, 1856, when another hurricane struck Cape San Blas. On May 1, 1858 a 3rd lighthouse was completed and lit. During the Civil War the lighthouse was not in commission but resumed operations July 23, 1865. Over the years, erosion began eating away at the lighthouse. In 1883 the 4th iron frame lighthouse was constructed. 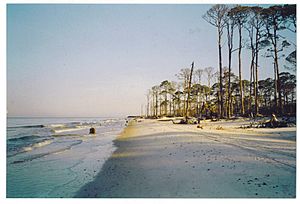 Hurricane Katrina left most of Cape San Blas's beaches severely damaged. The south point has experienced the most extreme erosion where the lighthouses have been historically located. Note in the background, the fortified main road can be seen running out into the water.

All content from Kiddle encyclopedia articles (including the article images and facts) can be freely used under Attribution-ShareAlike license, unless stated otherwise. Cite this article:
Cape San Blas Facts for Kids. Kiddle Encyclopedia.