Kids Encyclopedia Facts
Not to be confused with Apalachee Bay. 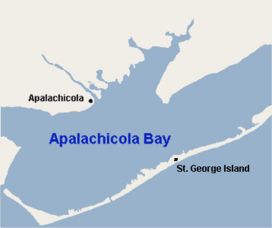 Apalachicola Bay is an estuary and lagoon located on the northwest coast of the U.S. state of Florida. The Apalachicola Bay system also includes St. George Sound, St. Vincent Sound and East Bay, covering an area of about 208 square miles (540 km2). Four islands, St. Vincent Island to the west, Cape St. George Island and St. George Island to the south, and Dog Island to the east, separate the system from the Gulf of Mexico. Water exchange occurs through Indian Pass, West Pass, East Pass and the Duer Channel. The lagoon has been designated as a National Estuarine Research Reserve and the Apalachicola River is the largest source of freshwater to the estuary. Combined with the Chattahoochee River, Flint River, and Ochlockonee River they drain a watershed of over 20,000 square miles (50,000 km2) at a rate of 19,599 cubic feet (550 m3) per second according to the United States Geological Survey in 2002.

The region features 1,162 species of plants, and includes the largest natural stand of tupelo trees in the world. The area is also home to 308 species of birds, 186 species of fish, 57 species of mammals, and boasts the highest species density of amphibians and reptiles in all of North America, north of Mexico stated by the Apalachicola Reserve, 2002.

The Apalachicola Bay formerly produced 90 percent of Florida’s oysters but the oysters, which thrive in brackish water, appear to be diminishing rapidly as a result of Atlanta Municipal water usage, which is diminishing the fresh water flowing into the bay. The increasingly salty water also increases the presence of oyster predators.

All content from Kiddle encyclopedia articles (including the article images and facts) can be freely used under Attribution-ShareAlike license, unless stated otherwise. Cite this article:
Apalachicola Bay Facts for Kids. Kiddle Encyclopedia.