Various Indian cultures occupied St. George Island for hundreds of years prior to the arrival of Europeans. Pottery fragments dating from A.D. 750 to 1450 occasionally are found on older portions of the island. Throughout the 1830s Apalachicola became Florida's largest port due to the booming cotton industry. With such a large volume of ships entering and leaving Apalachicola Bay a lighthouse was necessary. In 1831 the Florida Territorial Legislature was awarded an $11,800 Congressional appropriation to build a new lighthouse. 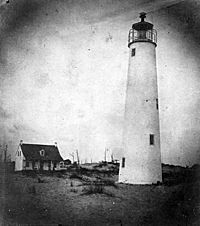 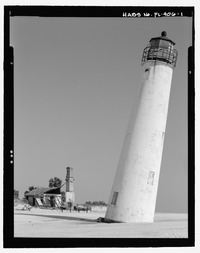 Cape Saint George Lighthouse in 1998 visibly inclined due to beach erosion. It toppled into the water on July 10, 2005.

A new replica of the Cape St. George lighthouse was finished December 1, 2006 on nearby St. George Island.

Pine trees on Cape St. George Island were "catfaced" in order to harvest turpentine from 1910 through 1916. During World War II the island served as a practice gunnery range for B-24 bombers stationed in nearby Apalachicola. From 1950 through 1956 the pine trees were again harvested for turpentine. The old buildings of the turpentine camp are still in existence at the Government Dock.

Cape St. George Island was purchased in 1977 under the Environmentally Endangered Lands program to protect it from development and to contribute to the protection of Apalachicola Bay. Cape St. George State Reserve, now referred to as Little St. George Island, is currently owned by the Florida Department of Environmental Protection's Florida Coastal Office and managed by the Apalachicola National Estuarine Research Reserve (ANERR). The Island's remoteness and wilderness qualities provide an opportunity to explore and enjoy a remnant of Florida's original natural landscape.

The island has extensive savannahs, old relic sand dune ridges and sand dunes and salt marshes. Ponds and marshes are found in the low swales between the old dune shoals. A small coastal hammock and black willow swamp can also be found.

There are a variety of recreational opportunities on Little St. George Island including hiking, beach activities, kayaking, wildlife viewing, primitive camping and fishing. Although the Island is only accessible by boat, there are many local outfitters that provide day trips to the Island and equipment rental. Primary access to the Island is from Sike's Cut and the Marshall and Government docks. Informational kiosks that describe recreation opportunities are prominently located at West Pass, Marshall House, and Sike's Cut.

There are a total of seven "Leave No Trace" camping sites: two sites at West Pass, two sites at the Government Dock, two sites at Sike's Cut, and one sheltered camping platform at the historic lighthouse location. Paddlers along the Florida Circumnavigational Saltwater Paddling Trail have priority at these sites. Sites are free and reservation is not required with ANERR but recommended. There are two primitive hiking trails located near the center of the Island. Island Ridge Trail extends out west from the Short Road and connects to the Bay for a nice viewpoint. A moderate 3 mile loop can be made by taking the trail out and the Old Bay Road back. Another primitive trail meanders along a dune ridge and takes visitors from the Government Dock camp to the Gulf Beach (1 mile). On the far east end, the Sike's Cut Trail is a 0.9 mile trail that can connect with the Gulf Beach to make a 1.6 mile loop. All roads and beaches can be hiked on Little St. George Island. Motorized vehicles are not allowed. Pets are welcome but must be leashed at all times due to the Island's beach and dune areas being critical shorebird and sea turtle nesting habitat.

Cape St. George Island is covered by several plant communities. Shrub and sea oats can be found on the newer dunes, Slash pine flatwoods are found in the low swales and savannahs. Scattered cabbage palmetto are found on overwash portions at the east and west ends of the island.

There are few mammals on the island due to the distance from the mainland; raccoons, coyotes, and squirrels are the most common. However, birds are very diverse and abundant during migration in the spring and fall. Notable birds of prey include the peregrine falcon, bald eagle, and osprey. Threatened loggerhead sea turtles and endangered green sea turtles and leatherback sea turtles nest on the beach throughout the summer, as do oystercatchers and endangered snowy plovers. Cottonmouths and rattlesnakes are common in the ponds and marshes. There are even a few gopher tortoises inhabiting the higher dunes of the island.

In 1997 the island was used as a propagation site for the endangered red wolf as part of the red wolf recovery program.

All content from Kiddle encyclopedia articles (including the article images and facts) can be freely used under Attribution-ShareAlike license, unless stated otherwise. Cite this article:
Cape St. George Island Facts for Kids. Kiddle Encyclopedia.