The red wolf (Canis lupus rufus) is a fast-running canid, territorial carnivore. These social mammals live and hunt in small packs. The red wolf is an endangered species of wolf from the Eastern North America. Red wolves were on the verge of extinction during the early 1900's, due to loss of habitat and hunting by farmers; these wolves may be starting to recover. Red wolves mate for life and have 2 to 6 pups each spring. 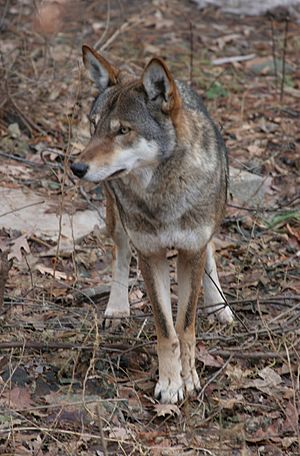 The red wolf's appearance is typical of the genus Canis, and is generally intermediate in size between the coyote and gray wolf, though some specimens may overlap in size with small gray wolves. A study of Canis morphometrics conducted in eastern North Carolina reported that red wolves are morphometrically distinct from coyotes and hybrids. Adults measure 136–160 cm (53.5–63 in) in length, and weigh 23–39 kg (50-85 lbs). Its pelage is typically more reddish and sparsely furred than the coyote's and gray wolf's, though melanistic individuals do occur. Its fur is generally tawny to grayish in color, with light markings around the lips and eyes. The red wolf has been compared by some authors to the greyhound in general form, owing to its relatively long and slender limbs. The ears are also proportionately larger than the coyote's and gray wolf's. The skull is typically narrow, with a long and slender rostrum, a small braincase and a well developed sagittal crest. Its cerebellum is unlike that of other Canis species, being closer in form to that of canids of the Vulpes and Urocyon genera, thus indicating that the red wolf is one of the more plesiomorphic members of its genus.

The red wolf is more sociable than the coyote, but less so than the gray wolf. It mates in January–February, with an average of 6-7 pups being born in March, April, and May. It is monogamous, with both parents participating the rearing of young. Denning sites include hollow tree trunks, along stream banks and the abandoned earths of other animals. By the age of six weeks, the pups distance themselves from the den, and reach full size at the age of one year, becoming sexually mature two years later.

Using long-term data on red wolf individuals of known pedigree, it was found that inbreeding among first-degree relatives was rare. A likely mechanism for avoidance of inbreeding is independent dispersal trajectories from the natal pack. Many of the young wolves spend time alone or in small non-breeding packs composed of unrelated individuals. The union of two unrelated individuals in a new home range is the predominant pattern of breeding pair formation. Inbreeding is avoided because it results in progeny with reduced fitness (inbreeding depression) that is predominantly caused by the homozygous expression of recessive deleterious alleles.

Prior to its extinction in the wild, the red wolf's diet consisted of rabbits, rodents, and nutria (an introduced species). In contrast, the red wolves from the restored population rely on white-tailed deer, raccoon, nutria and rabbits. It should be noted, however, that white-tailed deer were largely absent from the last wild refuge of red wolves on the Gulf Coast between Texas and Louisiana (where specimens were trapped from the last wild population for captive breeding), which likely accounts for the discrepancy in their dietary habits listed here. Historical accounts of wolves in the southeast by early explorers such as William Hilton, who sailed along the Cape Fear River in what is now North Carolina in 1644, also note that they ate deer. 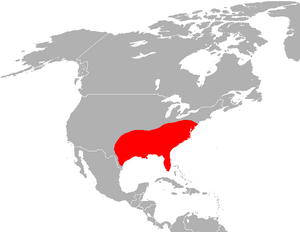 The originally recognized red wolf range extended throughout the southeastern United States from the Atlantic and Gulf Coasts, north to the Ohio River Valley and central Pennsylvania, and west to Central Texas and southeastern Missouri. Research into paleontological, archaeological and historical specimens of red wolves by Ronald Nowak expanded their known range to include land south of the Saint Lawrence River in Canada, along the eastern seaboard, and west to Missouri and mid-Illinois, terminating in the southern latitudes of Central Texas.

Since 1987, red wolves have been released into northeastern North Carolina, where they roam 1.7 million acres. These lands span five counties (Dare, Hyde, Tyrrell, Washington, and Beaufort) and include three national wildlife refuges, a U.S. Air Force bombing range, and private land. The red wolf recovery program is unique for a large carnivore reintroduction in that more than half of the land used for reintroduction lies on private property. Approximately 680,000 acres (2,800 km2) are federal and state lands, and 1,002,000 acres (4,050 km2) are private lands. Beginning in 1991, red wolves were also released into the Great Smoky Mountains National Park in eastern Tennessee. However, due to exposure to environmental disease (parvovirus), parasites, and competition (with coyotes as well as intraspecific aggression), the red wolf was unable to successfully establish a wild population in the park. Low prey density was also a problem, forcing the wolves to leave the park boundaries in pursuit of food in lower elevations. In 1998, the FWS removed the remaining red wolves in the Great Smoky Mountains National Park, relocating them to Alligator River National Wildlife Refuge in eastern North Carolina. Other red wolves have been released on the coastal islands in Florida, Mississippi, and South Carolina as part of the captive breeding management plan. St. Vincent Island in Florida is currently the only active island propagation site.

Given their wide historical distribution, red wolves probably used a large suite of habitat types at one time. The last naturally occurring population used coastal prairie marshes, swamps, and agricultural fields used to grow rice and cotton. However, this environment probably does not typify preferred red wolf habitat. Some evidence shows the species was found in highest numbers in the once extensive bottom-land river forests and swamps of the southeastern United States. Red wolves reintroduced into northeastern North Carolina have used habitat types ranging from agricultural lands to forest/wetland mosaics characterized by an overstory of pine and an understory of evergreen shrubs. This suggests that red wolves are habitat generalists and can thrive in most settings where prey populations are adequate and persecution by humans is slight.

All content from Kiddle encyclopedia articles (including the article images and facts) can be freely used under Attribution-ShareAlike license, unless stated otherwise. Cite this article:
Red wolf Facts for Kids. Kiddle Encyclopedia.