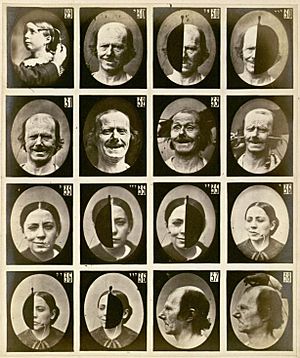 Photographs from the 1862 book Mécanisme de la Physionomie Humaine by Guillaume Duchenne. Through electric stimulation, Duchenne determined which muscles were responsible for different facial expressions. Charles Darwin would later republish some of these photographs in his own work on the subject, which compared facial expressions in humans to those in animals.

A facial expression results from one or more motions or positions of the muscles of the face. These movements show the emotional state of the person to observers. Facial expressions are a form of nonverbal communication. They are a primary means of conveying social information among humans, but also occur in most other mammals and some other animal species.

Humans can adopt a facial expression as a voluntary action. However, because expressions are closely tied to emotion, they are more often involuntary. It can be nearly impossible to avoid expressions for certain emotions, even when it would be strongly desirable to do so; a person who is trying to avoid insult to an individual he or she finds highly unattractive might nevertheless show a brief expression of disgust before being able to reassume a neutral expression. The close link between emotion and expression can also work in the other direction; it has been observed that voluntarily assuming an expression can actually cause the associated emotion.

Some expressions can be accurately interpreted even between members of different species- anger and extreme contentment being the primary examples. Others, however, are difficult to interpret even in familiar individuals. For instance, disgust and fear can be tough to tell apart.

Some examples of feelings that can be expressed are:

All content from Kiddle encyclopedia articles (including the article images and facts) can be freely used under Attribution-ShareAlike license, unless stated otherwise. Cite this article:
Facial expression Facts for Kids. Kiddle Encyclopedia.