The refuge attracts visitors worldwide for its red wolf (Canis rufus) howling programs and is also home to the Dare County Bombing Range. 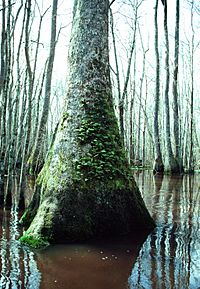 The refuge serves as a gateway to other eastern North Carolina refuges, encouraging visitors to venture inland into the counties with fewer economic advantages.

Refuge objectives are to protect and preserve unique wetland habitat types and the associated wildlife species, including endangered species such as red wolves, red-cockaded woodpeckers and American alligators. It also aims to provide a habitat for and management of waterfowl and other migratory birds, as well as for a wide variety of native wildlife species, through diverse wildlife management techniques and strategies.

An important objective is the restoration of historical water levels in the refuge by progressively plugging man-made drainage ditches. This will reduce fire danger as well as re-establish valuable wildlife habitat.

All content from Kiddle encyclopedia articles (including the article images and facts) can be freely used under Attribution-ShareAlike license, unless stated otherwise. Cite this article:
Alligator River National Wildlife Refuge Facts for Kids. Kiddle Encyclopedia.