Dare County is the easternmost county in the U.S. state of North Carolina. As of the 2010 census, the population was 33,920. Its county seat is Manteo. The county is named after Virginia Dare, the first child born in the Americas to English parents, who was born in what is now Dare County. 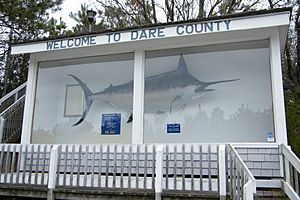 As of 2010, the largest self-reported ancestry groups in Dare County were:

Dare County is home to two popular lighthouses: The Cape Hatteras Lighthouse and the Bodie Island Lighthouse. There is also a beacon atop the Wright Brothers Memorial. A third lighthouse was built by the Town of Manteo and dedicated on September 25, 2004. The Roanoke Marshes Lighthouse is an exterior recreation of the 1877 screwpile lighthouse of the same name and is located on the Manteo waterfront. It serves as exhibit space for the N.C. Maritime Museum on Roanoke Island.

All content from Kiddle encyclopedia articles (including the article images and facts) can be freely used under Attribution-ShareAlike license, unless stated otherwise. Cite this article:
Dare County, North Carolina Facts for Kids. Kiddle Encyclopedia.