Currituck County is the northeastern-most county in the U.S. state of North Carolina. As of the 2010 census, the population was 23,547. Its county seat is Currituck. The county was formed in 1668 as a precinct of Albemarle County and later gained county status in 1739. The name is "traditionally said to be an Indian word for wild geese; Coratank."

Currituck County is included in the Virginia Beach-Norfolk-Newport News, VA-NC Metropolitan Area. It is in the northeastern section of the state and is bounded by the Atlantic Ocean, Currituck Sound, Camden County, Dare County and the state of Virginia. Currituck Court House, mentioned as early as 1755, was the name of the county seat. Today the words "Court House" have been dropped and only Currituck is used as the town name. 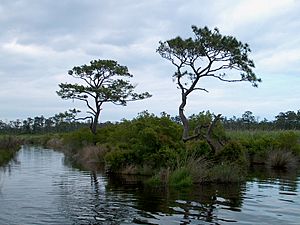 Pine trees are common in Currituck County, like these in Mackay Island National Wildlife Refuge. 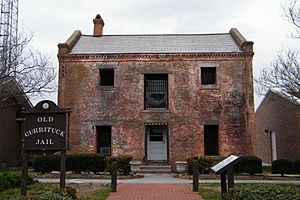 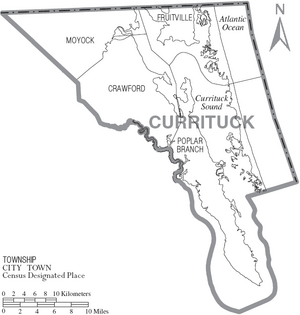 Map of Currituck County with municipal and township labels

All content from Kiddle encyclopedia articles (including the article images and facts) can be freely used under Attribution-ShareAlike license, unless stated otherwise. Cite this article:
Currituck County, North Carolina Facts for Kids. Kiddle Encyclopedia.