Corolla as viewed from the Currituck Lighthouse 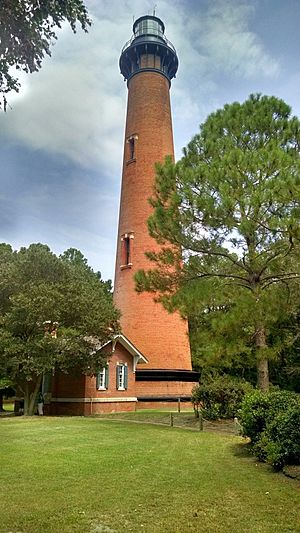 Corolla is an unincorporated community located in Poplar Branch township, Currituck County, North Carolina along the northern Outer Banks. It has a permanent population of approximately 500 people; during the summer vacation season, the population surges into the thousands. Corolla is home to the Currituck Beach Lighthouse, one of the seven North Carolina coastal lighthouses.

Previously a quiet and little-known location, a development boom in the 1980s sparked growth in the area, and Corolla has become a popular vacation destination. Resting between the Currituck Sound and the Atlantic Ocean, Corolla attracts mainly beach-goers, especially in the summer months. Besides the beach, Corolla is home to many other attractions including the historic Whalehead Club, Currituck Beach Lighthouse, Center for Wildlife Education, shopping, dining, water sports, and Corolla’s wild horses.

Corolla is home to about 119 feral Banker horses. They are located on a 12,000-acre (49 km²) animal sanctuary situated north of the populated areas of Corolla. The Corolla Wild Horse Fund is a public charity whose mission is to protect and preserve the herd.

Corolla is home to the Outer Banks Center for Wildlife Education, located in Currituck Heritage Park. The park has a boardwalk through wetlands. It is listed as an eBird hotspot, with at least 80 species recorded in the park. Less than a mile north of Corolla is the Currituck Banks North Carolina National Estuarine Research Reserve. 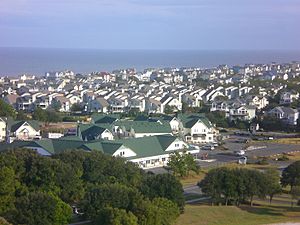 Corolla, as viewed from the Currituck Beach Lighthouse

The community of Corolla began as a European development on American Indian hunting grounds. Tribes including the Chowanoke and Poteskeet hunted along the barrier island.

The European-American town of Corolla was first called Jones Hill, after an early settler. It was also known as Whalehead or Currituck Beach. Early settlers made a living from fishing and hunting, as well as from salvage from shipwrecks and serving as guides to hunters.

Construction of the Currituck Beach Lighthouse resulted in a stabilization of the economy with a new influx of jobs.

Currituck was derived from an American Indian term, Carotank, meaning land of the wild geese. On the Atlantic migratory flyway, the area at the time had a large wild geese population. Over hunting in the late 19th century caused numbers to severely drop.

The town officially took the name Corolla in 1895 when a post office opened in the community. The name was chosen to refer to the botanic term for the petals of a flower. 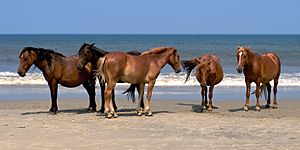 Development of Currituck's Northern Outer Banks began in 1967 when investors from Sandbridge, Virginia, put together an investment group to purchase undeveloped land. The first subdivision plotted was Carova with 1,993 lots. The lots were originally priced in the early 1970s at $8,000; as of 2006, some of these lots are worth up to $500,000. 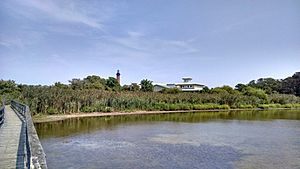 The investors planned for a road to come through from Virginia Beach, Virginia, to allow access to the lots; however, these plans were abandoned in 1973 when the Back Bay National Wildlife Refuge south of Sandbridge was closed to all vehicular traffic, except by permit. Development pushed south through the 1970s, creating well over 1,000 additional lots in several subdivisions. In 1984 the residents of Corolla succeeded in their attempts to gain a public access road from the south. The state began paving the extension of NC-12 toward the north.

In addition to the Currituck Beach Light, the Currituck Shooting Club and Whalehead Club are listed on the National Register of Historic Places.

All content from Kiddle encyclopedia articles (including the article images and facts) can be freely used under Attribution-ShareAlike license, unless stated otherwise. Cite this article:
Corolla, North Carolina Facts for Kids. Kiddle Encyclopedia.