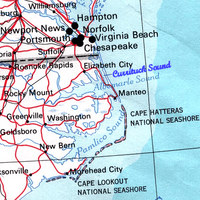 Currituck /ˈkʊrɪtʌk/ Sound is a protected inlet of the Atlantic Ocean, located in northeastern part of North Carolina and extreme southeastern Virginia. Thirty miles N-S and 3–8 miles wide, this shallow, island-filled sound is separated from the ocean by the Currituck Banks Peninsula (formerly Bodie Island), part of the Outer Banks. On the NE, it extends to Back Bay in Virginia Beach, Virginia. A fork on the northwest leads to the Albemarle and Chesapeake Canal, which is a part of the Atlantic Intracoastal Waterway that connects the sound to Hampton Roads and the Chesapeake Bay. Although several inlets connected it directly to the Atlantic at one time or another, they have all since closed and there is now no direct access to the Ocean from the Sound. This has caused the salinity levels to be significantly lower than they had been historically. Currently, the only access to the Ocean is through the Albemarle Sound, which joins the Currituck to the South. Currituck County's Mackay Island and Currituck National Wildlife Refuge as well as Back Bay National Wildlife Refuge and False Cape State Park in Virginia Beach border the sound and are winter habitats on the Atlantic Flyway. Many watersports activities occur in the sound, including parasailing, sea kayaking, and jet skiing. An area of barrier beaches, it is also noted for its duck and goose hunting.

All content from Kiddle encyclopedia articles (including the article images and facts) can be freely used under Attribution-ShareAlike license, unless stated otherwise. Cite this article:
Currituck Sound Facts for Kids. Kiddle Encyclopedia.