Camden County is a county located in the American state of North Carolina. As of the 2010 census, the population was 9,980, making it the fourth-least populous county in North Carolina. Its county seat is Camden.

The county was formed in 1777 from the northeastern part of Pasquotank County. It was named for Charles Pratt, 1st Lord Camden, who had opposed the Stamp Act. The county is the site of the southern terminus of the Dismal Swamp Canal. It was the site of the Battle of South Mills on April 19, 1862 during the American Civil War, which was a minor victory to the Confederacy.

Shiloh Baptist Church, founded around 1727 by Paul Palmer, is the oldest Baptist church in North Carolina. It is located in the Shiloh township.

Though technically there are (or were) no incorporated municipalities in Camden County, the county became the first consolidated city-county entity in North Carolina in June 2006.

Camden County is the location of Academi's Blackwater Lodge and Training Center for paramilitary and security operations. 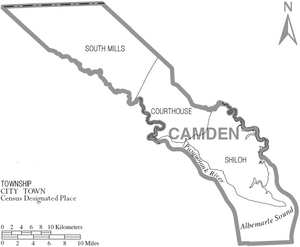 All content from Kiddle encyclopedia articles (including the article images and facts) can be freely used under Attribution-ShareAlike license, unless stated otherwise. Cite this article:
Camden County, North Carolina Facts for Kids. Kiddle Encyclopedia.