Pasquotank County is a county located in the U.S. state of North Carolina. As of the 2010 census, the population was 40,661. Its county seat is Elizabeth City. The county was originally created as Pasquotank Precinct and gained county status in 1739.

Almost all of the terrain in Pasquotank County is flatland with a topography near sea level, a characteristic of most of North Carolina's Coastal Plain. The county is flanked by two rivers: the Pasquotank—with which it shares its name—to the east, and the Little River to the west. 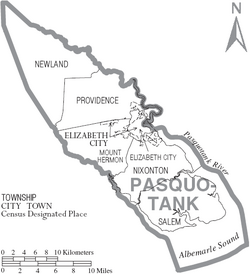 All content from Kiddle encyclopedia articles (including the article images and facts) can be freely used under Attribution-ShareAlike license, unless stated otherwise. Cite this article:
Pasquotank County, North Carolina Facts for Kids. Kiddle Encyclopedia.