Gates County is a small, rural county located in the northeast portion of the U.S. state of North Carolina, on the border with Virginia. As of the 2010 census, the population was 12,197. Its county seat is Gatesville.

Gates County is included in the Virginia Beach-Norfolk-Newport News, VA-NC Metropolitan Statistical Area. It is part of the Albemarle Sound area of the Inner Banks.

As in other areas along the waterways, Native Americans had settled these lands for thousands of years, with different groups leaving and new ones migrating to settle again. They created settlements, increasingly permanent, along the Chowan River.

At the time of European contact, the Chowanoke was the largest tribe in North Carolina of the many in the Algonquian language family and occupied most of the territory along the river. After suffering dramatic population decreases by the early 17th century due to European infectious diseases, to which they had no immunity, most survivors were pushed out by encroaching Tuscarora, an Iroquoian-speaking tribe.

In 1585, the Ralph Lane Colony explored the Chowan River. They explored the river at least as far up as present-day Winton, North Carolina. In 1622, the John Pory Colony led an expedition from Virginia to the Chowan River. (Pory was secretary of the Province of Virginia.) In 1629, Sir Robert Heath was granted a patent to settle Carolina. This patent embraced Gates County.

The Chowanoke waged war against the encroaching colonists in 1644 but lost. During the 1650s, colonists from Virginia started to move increasingly into the Albemarle Sound region. Colonel Drew and Roger Green led an expedition into the Albermarle area. In 1654, Francis Speight was granted a patent for 300 acres (1.2 km2) of land near Raynor Swamp. The first English settlement in Gates County was established near Corapeake in 1660. In 1670, Colonel Henry Baker of Nansemond County obtained a grant of land for 2,400 acres (9.7 km2) near Buckland. In 1672, George Fox, leader of the Quakers, visited Gates County. He described the county as barren.

The Chowanoke renewed their effort to expel the colonists, warring from 1675-1677. Following the English defeat of these forces, in 1677 they created a Chowanoke Indian Reservation, the first within the present-day United States. The 11,360-acre reservation was established at the Chowanoke settlement between Bennett's Creek and Catherine Creek in Gates.

From 1684–1722 Gates County was a part of the Chowan precinct. In 1711, the Society for the Propagation of the Gospel established an Anglican school for Chowanoke and local Native Americans at Sarum, with Mr. Marshburn as the teacher. During the 18th century, the Chowanoke lost most of their land, selling off portions to help the tribe survive. Men's names were recorded in tribal conveyances, and many modern descendants can trace their ancestry to these families. Some members began to intermarry with other Native Americans, such as the nearby Meherrin people, Europeans and African Americans.

In 1738, Anglo-European settlers created a mail route from Suffolk, Virginia to Corapeake and Edenton, North Carolina. The stage coach route crossed the Chowan River at Barfield.

Gates County was organized in 1779 from parts of Chowan, Hertford, and Perquimans counties. It was named for General Horatio Gates, who had commanded the victorious American colonial forces at the Battle of Saratoga in 1777.

In 1806, white settler established Middle Swamp Baptist Church as the first Baptist church in Gates County. This accompanied the Second Great Awakening revival in the South after the American Revolution, which was led by Baptist and Methodist preachers. In 1811, Savages United Methodist Church was established, the oldest Methodist Church in Gates County. Both denominations preached to enslaved blacks as well as white settlers, and accepted slaves and free blacks as members and sometimes as preachers.

The Chowanoke lost their last 30-acre plot of communal land in 1821. Although Gates County residents were mostly yeomen farmers who owned few slaves, the South overall generally had a slave society which classified people as black or white. However, Native Americans managed to maintain their culture and absorb people of other races in their matrilineal kinship systems. The Chowanoke were increasingly classified as free people of color, along with free black citizens and mulattos.

In 1825, the Marquis de Lafayette travelled through Gates County and was entertained at Pipkin's Inn. The town of Gatesville was incorporated in 1830. The old courthouse was built in 1836. Its oldest component is its Federal-style bell, which had purchased by the town in 1781.

According to the 1850 census, of the 717 farms in Gates County, only 15 produced cotton. In 1851, Reynoldson Academy was established. Free people of color, who were often of mixed race, organized New Hope Baptist church in 1859.

People in the county worked to develop better connections to major ports. From 1805–1822, they developed the Cross Canal, or Hamburg Ditch, three miles (5 km) south of the Virginia line. It was Gates County's water route to the major port of Norfolk, running straight east for ten miles (16 km) through the Dismal Swamp, from a landing on Daniels Road in Gates County to the Dismal Swamp Canal. That led to Norfolk.

The Dismal Swamp Canal Welcome Center is now located at the landing on Daniels Road. The Cross Canal is no longer a through route, closed by hurricanes bringing trees down and blocking access. In the late 20th century, sportsmen in small boats had still used the Gates County end, at the site of Hamburg, to enter the swamp.

Prior to the American Civil War, most of Gates County was covered with virgin timber. In 1861, A. J. Walton was chosen as Gates County's representative to the North Carolina secession convention. After North Carolina voted to secede, the "Gates Guard" company was formed raised to protect its borders. It was soon joined by asecond company, the "Gates Minutemen". However, Gates County's greatest contribution was in supplying food to the Confederate States Army. General William P. Roberts would become the youngest general. Brigadier General Laurence S. Baker, another Gates County native, lost an arm in the war.

Jack Fairless of Gates County was dishonorably discharged from the Confederate army for stealing. He returned home and formed an outlaw band known as the "Buffaloes". Made up of draft dodgers, Confederate deserters, and renegades from both armies, Fairless's Buffaloes terrorized the old men, women, children who were trying to keep their farms going. Fairless was finally killed by his own men when they turned on him.

Fort Dillard was a Confederate fort in Gates county. Nevertheless, the county was sometimes subject to Union raids. That of the "Ellis Girls" is told even today. While fishing in the Chowan River, the sisters saw a Union gunboat on its way upriver to attack Winton. Union soldiers captured the girls and held them prisoners on until they had finished burning the town.

In the 1930s Gates County still had no paved roads and few people owned automobiles. Most families grew their own produce and some raised livestock. In 1935 during the Great Depression, the Sunbury Ruritan Club was established, the first and oldest Ruritan chapter in the state. The civic organization of men was active in improving the town: "in its first three months..., the Sunbury Ruritan Club sponsored a Community Agriculture Fair; contacted NC DOT to place a stop signal at the Edenton-to-Suffolk Road; purchased school books for needy children; paid one-half the cost of new shades for the school; had the school piano tuned; and later made a contribution to the school’s basketball team and sponsored a move to hire a police officer to serve the community."

In September 2007 Gates County was chosen as a potential site for a US Navy landing field in the northeastern part of the state.

In 2014 Delois Chavis, a Chowanoke descendant, worked with other Chowanoke to buy 146 acres of the tribe's former reservation land near Bennett's Creek. She had grown up knowing of her Native American identity from her parents and grandparents, and is among those who want to revive the tribe. They have organized as the Chowanoke Indian Tribe, and plan to build a cultural center on the land to help their efforts. 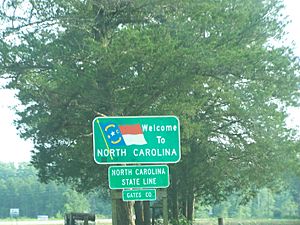 A welcome sign at the NC state line on U.S. 13 is visible in this shot.

The counties of Gates, Perquimans, Camden and Currituck contain sixty percent of the Great Dismal swamp. In 1973, Union Camp donated the land which it owned in the swamp to the Nature Conservancy. The Conservancy next donated the land to the Department of The Interior, and the Great Dismal Swamp National Wildlife Refuge was created. The refuge consists of 107,000 acres (430 km2) of swamp and wetlands' surrounding Lake Drummond. 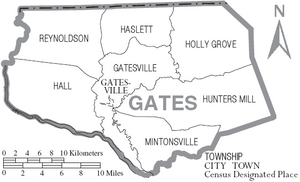 All content from Kiddle encyclopedia articles (including the article images and facts) can be freely used under Attribution-ShareAlike license, unless stated otherwise. Cite this article:
Gates County, North Carolina Facts for Kids. Kiddle Encyclopedia.