Chowan County is one of the 100 counties located in the U.S. state of North Carolina. As of the 2010 census, the population was 14,793. Its county seat is Edenton. The county was created between 1668 and 1671 as Shaftesbury Precinct and later renamed Chowan Precinct. It gained county status in 1739.

Chowan was formed in 1670 as a precinct, originally called Shaftesbury, in Albemarle County. By 1685 it had been renamed for the Chowan Indian tribe, which lived in the northeastern part of the Carolina Colony.

Chowan County is in the northeastern section of the State and is bounded by Albemarle Sound, Chowan River, and the counties of Bertie, Hertford, Gates, and Perquimans. The present land area is 172.64 square miles and the 2000 population was 14,150.

In 1720, Edenton, which was named in honor of Governor Charles Eden, was established. In 1722 it was designated, and has continued to be, the county seat. 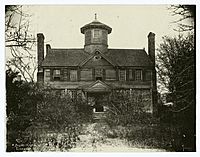 During the American Civil War, the Albemarle Artillery was recruited in 1862 from Chowan and Tyrrell men at Edenton by local attorney William Badham, Jr.. After cannon were recast from bronze donated as bells from local courthouses and churches to arm the battery, the unit was renamed the Edenton Bell Battery. They named their cannon: Columbia, St. Paul, Fannie Roulac, and Edenton. Two of the guns, long thought lost, have been returned to Edenton in recent years. The St. Paul and the Edenton now can be seen on display at Edenton's waterfront park. The county was named after the historical Chowanoc American Indian tribe, also called Chowan. 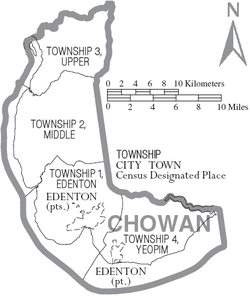 All content from Kiddle encyclopedia articles (including the article images and facts) can be freely used under Attribution-ShareAlike license, unless stated otherwise. Cite this article:
Chowan County, North Carolina Facts for Kids. Kiddle Encyclopedia.