Kids Encyclopedia Facts
"Hertford County" redirects here. For the county in England, see Hertfordshire.
Not to be confused with Hertford, North Carolina.

Hertford County is a county located in the U.S. state of North Carolina. As of the 2010 census, the population was 24,669. Its county seat is Winton. It is classified within the region known in the 21st century as the Inner Banks.

Hertford County is home of the Meherrin Indian Tribe, descendants of indigenous people who had inhabited the region for many centuries. After decades of encroachment by English colonists, the Tribe moved south from Virginia, where they settled in 1706 on a reservation abandoned by the Chowanoke. This six-square-mile reservation was at Parker's Ferry near the mouth of the Meherrin River. It was confirmed by a treaty of 1726. However, they were not able to keep the reservation lands.

The Tribe today has approximately 900 enrolled members, most living within 10–15 miles of the former reservation. The tribe is recognized by the state and is seeking Federal recognition. The Meherrin have an annual Pow Wow at the end of October.

The county was formed in 1759 from parts of Bertie County, Chowan County, and Northampton County. It was named for Francis Seymour-Conway, 1st Earl of Hertford, later 1st Marquess of Hertford.

In 1779 the northeastern part of Hertford County was combined with parts of Chowan County and Perquimans County to form Gates County. 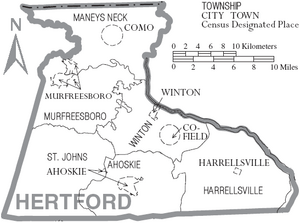 Several large employers are located in Hertford County, including a privately run federal prison, Chowan University, a Nucor steel mill, several Perdue poultry processing facilities, an aluminum extrusion facility in Winton, and a lumber-processing facility in Ahoskie. These industries, combined with a typical range of local retail, restaurant and service businesses, combine to give Hertford County one of the lowest unemployment rates in Northeastern North Carolina. The larger area has historically lagged behind the rest of the state in terms of economic development.

All content from Kiddle encyclopedia articles (including the article images and facts) can be freely used under Attribution-ShareAlike license, unless stated otherwise. Cite this article:
Hertford County, North Carolina Facts for Kids. Kiddle Encyclopedia.