Bertie County ( BUR-tee, with both syllables stressed) is a county located in the northeast area of the U.S. state of North Carolina. As of the 2020 census, the population was 17,934. Its county seat is Windsor. The county was created in 1722 as Bertie Precinct and gained county status in 1739.

The Sans Souci Ferry, providing access across the Cashie River, is the county's only ferry.

The county was formed as Bertie Precinct in 1722 from the part of Chowan Precinct of Albemarle County lying west of the Chowan River. It was named for James Bertie, his brother Henry Bertie, or perhaps both, each having been one of the Lords Proprietors of Carolina. 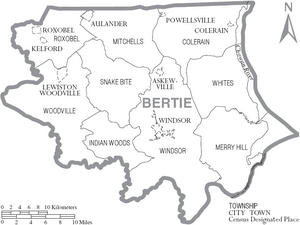 The population ranking of the following table is based on the 2010 census of Bertie County.

All content from Kiddle encyclopedia articles (including the article images and facts) can be freely used under Attribution-ShareAlike license, unless stated otherwise. Cite this article:
Bertie County, North Carolina Facts for Kids. Kiddle Encyclopedia.