The county was formed in 1741 from Bertie County. It was named for Richard Edgcumbe, a Member of Parliament from 1701 to 1742 and a lord of the treasury, who became 1st Baron Edgcumbe in 1742.

In 1746 part of Edgecombe County became Granville County; in 1758 another portion became Halifax County; and in 1777 yet another part became Nash County. In 1855 the formation of Wilson County from parts of Edgecombe County, Johnston County, Nash County, and Wayne County reduced Edgecombe to its present size, with a minor boundary adjustments.

Edgecombe County was historically home to the Tuscarora Indians. Although most migrated north to New York in the 18th century, descendents of the Tuscarora still live in some parts of the county. 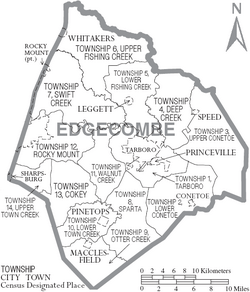 The county is divided into fourteen townships, which are both numbered and named:

Edgecombe County Public Schools has 14 schools ranging from pre-kindergarten to thirteenth grade. These are separated into four high schools, four middle schools, five elementary schools, and 1 K-8 school. It was formed in 1993 from the merger of the old Edgecombe County Schools and Tarboro City Schools systems.

The county is home to Edgecombe Community College with campuses in Tarboro and Rocky Mount.

All content from Kiddle encyclopedia articles (including the article images and facts) can be freely used under Attribution-ShareAlike license, unless stated otherwise. Cite this article:
Edgecombe County, North Carolina Facts for Kids. Kiddle Encyclopedia.