Rocky Mount is a city in Edgecombe and Nash counties in the Atlantic coastal plain region of the U.S. state of North Carolina. Although it was not formally incorporated until February 28, 1907, the North Carolina community that became the city of Rocky Mount dates from the beginning of the 19th century. The first post office in the area opened in 1816. The city's population was 57,685 at the 2010 census, with an estimated population of 56,325 in 2014. Rocky Mount has received the All-America City Award from the National Civic League two times, in 1969 and 1999. 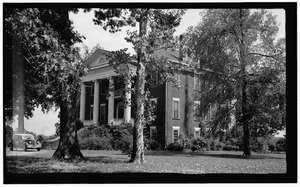 Rocky Mount had its beginning in the early part of the 19th century around the first post office which was established at the falls of the Tar River on March 22, 1816. At that point, the name "Rocky Mount" appeared in documented history. The name undoubtedly derived from the rocky mound at the falls of the Tar River, which was also the site of one of the first cotton mills in North Carolina: Rocky Mount Mills was established in 1818. The Wilmington and Weldon Railroad was built about two miles (3 km) east of the mill in 1845 and became the main connection for Rocky Mount to the outside world.

An important change the railroad brought was the establishment of Rocky Mount as a point of departure for travelers from the north and south. The Raleigh-Tarboro stage route (roughly where I-95 and U.S. 64 run today) passed just below Rocky Mount, which became the logical debarking point for railroad travelers wishing to proceed east or west.

The Civil War and Reconstruction Era brought hard times to Rocky Mount. On February 19, 1867, Rocky Mount was incorporated as a town.

Also during this period, the railroad exerted a powerful influence on the town. The tracks first reached Rocky Mount on Christmas Eve in 1839. In 1840, a train of cars en route to Wilmington stopped in Rocky Mount to import some "Old Nash" for special toasts at opening festivities. The fame of Nash County apple brandy had spread fast. As Rocky Mount encouraged the Atlantic Coast Line Railroad to locate shops and yard facilities in the town, an influx of railroad employees into Rocky Mount occurred. In 1871, the county line moved from the Tar River to its present location in the center of the tracks.

By the turn of the 20th century, Rocky Mount's population was around 3,000. A main railroad line, a well established cotton mill, and productive farmland were major contributors to the area's growth and prosperity. To encourage and promote further growth and development, the Chamber of Commerce was established in 1904.

On February 28, 1907, with a population around 7,500, Rocky Mount was incorporated as a city. The 20th century brought a number of "firsts" to Rocky Mount - the first public school; one of the most modern hotels in the state, the Ricks Hotel; the first library; the establishment of the first daily newspaper, the Rocky Mount Evening Telegram; the first hospitals with services available to the public; and the YMCA. 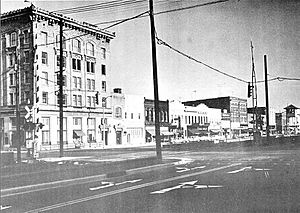 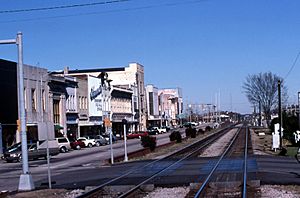 In 1970, Rocky Mount received an All-America City Award. The little town built upon a rock had become the progressive city on the Great Falls of the Tar. The '70s also brought a new post office building, completion of Nash General Hospital, a new campus for Nash Community College, recreational use of the reservoir on the Tar River, a new water plant, the Rocky Mount–Wilson Regional Airport, and new highways. 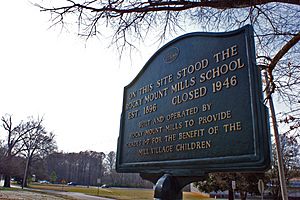 Situated near Rocky Mount's Tar River, the Rocky Mount Mills Village grew in the late 19th and early 20th centuries as a small community of tenants working for the mill. Changes in industrialization eventually forced the closing of the mill, and this way of life came to an end. However, when the mill closed, the property remained intact.Though the property has been a rental for its entire existence, covenants are now being placed on the property to assure home ownership and owner occupancy. The covenants are also designed to protect the historical integrity of the existing structures in the village and to control the new infill residential construction.

Built between 1885 and 1940, each home is recognized by the National Register of Historic Places. The houses stand in generally good condition. A typical house can be described as a one-story building of gabled, saddlebag frame construction with weatherboard siding, complete with a gabled one-story ell and a hip-roofed porch. The two-story buildings are single-pile frame construction with weatherboard siding, rear one-story addition, and hip-roofed porch. Once accommodating 145 homes, the village now contains 62 remaining residences. The layout of lots has approximated the original design for the village where the lots are deep and originally accommodated large vegetable gardens in the rear. In many cases, the original windows, doors, and hardware are intact.

In 2007, Capitol Broadcasting Company purchased the Rocky Mount Mills, along with about 30 mill houses and 30 vacant lots for mill houses. The same company also owns American Tobacco in downtown Durham, North Carolina. In May 2014, it was announced that the Rocky Mount Mills will be turned into a Brewmill. It will be the first craft brewery incubator in North Carolina.

Rocky Mount is located in northeastern North Carolina, at the Fall Line between the Atlantic Coastal Plain to the east and the Piedmont region to the west. The city is 58 miles (93 km) east of Raleigh, the state capital, 91 miles (146 km) northeast of Fayetteville, 144 miles (232 km) north of Wilmington, 19 miles (31 km) north of Wilson, 42 miles (68 km) south of Roanoke Rapids, and 127 miles (204 km) south of Richmond, Virginia.

Rocky Mount straddles the Nash/Edgecombe County line, which follows the CSX Transportation railroad tracks through the center of the city.

Rocky Mount has a growing arts community. The city operates the Maria V. Howard Arts Center, a Children's Museum and Science Center, and a community theater at the Imperial Center for Arts and Sciences.

Recently, the city renovated the Douglas Block, located in downtown Rocky Mount. Six historically significant buildings, all of which composed the African American business district of the downtown area in the early to mid-1900s, was a part of this renovation. The Douglas Block includes Thelonious Monk Plaza, named after Rocky Mount native and jazz musician Thelonious Monk.

All content from Kiddle encyclopedia articles (including the article images and facts) can be freely used under Attribution-ShareAlike license, unless stated otherwise. Cite this article:
Rocky Mount, North Carolina Facts for Kids. Kiddle Encyclopedia.