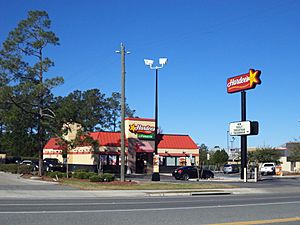 Hardee's is an American fast food franchise which first began on September 3, 1960. It operates mainly across the Midwestern States of the United States. The restaurant sells chicken strips, French fries and burgers. Wilbur Hardee was the founder of Hardee's.

All content from Kiddle encyclopedia articles (including the article images and facts) can be freely used under Attribution-ShareAlike license, unless stated otherwise. Cite this article:
Hardee's Facts for Kids. Kiddle Encyclopedia.