A wrap is a food dish made with a soft flatbread rolled around a filling. 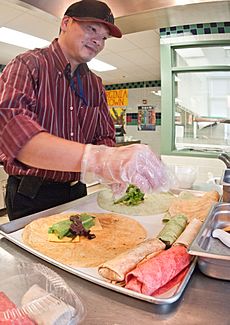 Preparing wraps in a kitchen

People in Mexico, Mediterranean, and South Asia have been eating wraps since before and around the 1900s. Mexicans refer to them as burritos, and they come in different ingredient varieties, primarily wheat flour or corn, typically filled with meat, beans, rice, cheese, and other ingredients.

The wrap in its Western form probably comes from California, as a generalization of the Mexican and Tex-Mex burrito, and became popular in the 1990s. It may have been invented and named at a southern California chain called "I Love Juicy" in the early 1980s. The OVO Bistro in NYC introduced its wrap sandwich in 1990 under the name "The King Edward," The Bobby Valentine Sports Gallery Cafe in Stamford, Connecticut is sometimes claimed to have invented the wrap at about the same time, but Valentine is diffident about it: "Well, that's legend and folklore, but until somebody disputes me or comes up with a better story, I'll say I invented the wrap." Beth Dolan of Stamford, Connecticut is the waitress credited for serving the first wrap after the restaurant had run out of bread. Moreover, Valentine's own story dates his use of the name 'wrap' to the mid-1990s, after it is documented in California. San Francisco-based chain World Wrapps, which opened its first location in February 1995, is credited with popularizing the wrap nationwide.

In the 1900s, Kati roll became a popular street-food in Kolkata, India, with kebab wrapped in paratha bread; although over the years many variants have evolved all of which now go under the generic name of kati roll. Restaurants such as Camille's Sidewalk Cafe, Sonic Drive-In, Jason's Deli, Buffalo Wild Wings, Subway, Chick-fil-A, Roly Poly and McAlister's Deli serve wraps. KFC now serves its chicken in a wrap as menu choice, with lettuce, mayonnaise and salsa. McDonald's has a snack wrap, with a fried, or grilled chicken strip, lettuce, cheddar, and ranch dressing. Smokey Bones Barbeque and Grill has recently introduced a Portobello Chicken Wrap to broaden their selection of grilled menu items.

All content from Kiddle encyclopedia articles (including the article images and facts) can be freely used under Attribution-ShareAlike license, unless stated otherwise. Cite this article:
Wrap (food) Facts for Kids. Kiddle Encyclopedia.