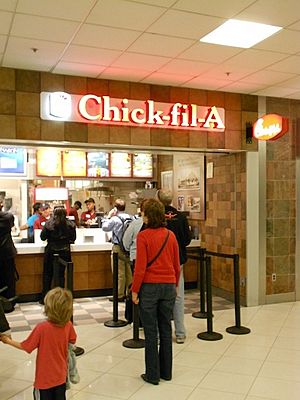 Chick-fil-A ( chik-fil-AY, a play on the American English pronunciation of "fillet") is an American fast food restaurant chain headquartered in the Atlanta district of College Park, Georgia, specializing in chicken sandwiches. all Chick-fil-A restaurants are closed for business on Sunday as well as Thanksgiving and Christmas.

Certain cities, particularly Chicago and Boston, have refused to allow Chick-fil-A to represent service in their areas.

In 1961, after 15 years in the fast food business, Cathy found a pressure-fryer that could cook the chicken sandwich in the same amount of time it took to cook a fast-food hamburger. Following this discovery, he registered the name Chick-fil-A, Inc. The company's trademarked slogan, "We Didn't Invent the Chicken, Just the Chicken Sandwich," refers to their flagship menu item, the Chick-fil-A chicken sandwich.

The first Chick-fil-A opened in 1967, in the food court of the Greenbriar Mall, in a suburb of Atlanta. During the 1970s and early 1980s, the chain expanded by opening new franchises in suburban malls' food courts. The first freestanding franchise was opened April 16, 1986, on North Druid Hills Road in Atlanta, Georgia, As of 2016, the chain has approximately 1,950 locations. It also has 31 drive-through-only locations. Chick-fil-A also can be found at universities, hospitals, and airports through licensing agreements.

"Eat Mor Chikin" is the chain's most prominent advertising slogan, created by The Richards Group in 1995. The slogan is often seen in advertisements, featuring Holstein dairy cows that are often seen wearing (or holding) signs that (usually) read: "Eat Mor Chikin" in all capital letters.

Though Chick-fil-A has always used trans-fat free processes in its chicken sandwiches, anticipating the dietary concerns of consumers, in 2008, it became the first fast-food restaurant to become completely trans-fat free.

All content from Kiddle encyclopedia articles (including the article images and facts) can be freely used under Attribution-ShareAlike license, unless stated otherwise. Cite this article:
Chick-fil-A Facts for Kids. Kiddle Encyclopedia.