A flour tortilla or wheat tortilla is a type of soft, thin flatbread made from finely ground wheat flour. It was originally inspired by the corn tortilla of Mexican cuisine, a flatbread of maize which predates the arrival of Europeans to the Americas. Made with a flour and water based dough, it is pressed and cooked similar to corn tortillas. The simplest recipes use only flour, water, fat, and salt, but commercially-made flour tortillas generally contain chemical leavening agents such as baking powder, and other ingredients.

It is said by some that flour tortillas originated in the northern Mexican states of Chihuahua, Durango, Sonora and Sinaloa, where the territory is more suited to growing wheat than corn. In recent times, they have become integral to Mexican American (most notably in the form of a burrito), Mexican—and Tex-Mex—cuisine. Mexican Americans talk about the flour tortilla having come from the wheat-filled plenty of the United States. Most often it is attributed to Alta California when California was still part of the Mexican Republic. Most specifically, it is credited to regions of Northern & Central California with the first mass produced flour tortillas having come from flour tortilla factories in metropolitan Los Angeles. Some have even attributed the origin of flour tortillas to Jewish immigrants of the United States.

Tortilla in Iberian Spanish also means omelette. As such, this wheat flour flatbread tortilla is not to be confused with the Spanish omelette or any other egg based one. 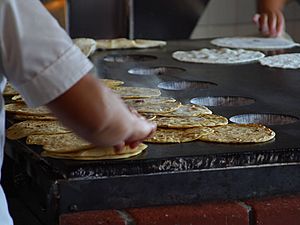 Tortillas being made in Old Town San Diego 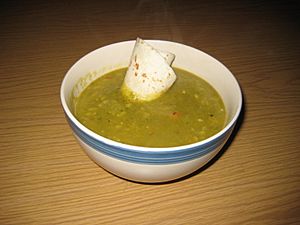 A thick, American-style pea soup garnished with a tortilla sliver

Wheat tortillas are a staple of the northern Mexican states (such as Sonora, Sinaloa and Chihuahua) and throughout the Southwestern United States.

Tortillas vary in size from about 6 to over 30 cm (2.4 to over 12 in), depending on the region of the country and the dish for which it is intended.

Industrially-produced tortillas typically contain numerous chemicals in order to ease the production process, control texture and flavor, and to extend shelf life. Work has been done at Washington State University to develop methods for producing tortillas on a mass scale while still using only whole-wheat flour, water, oil, and salt, with a fermented flour-and-water sourdough starter replacing chemical leaveners. 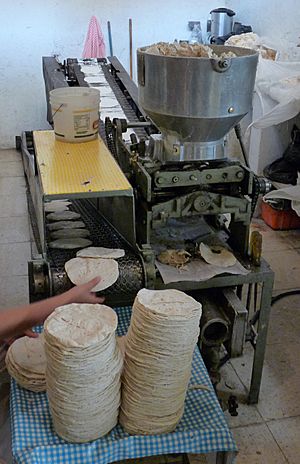 Today, personal and industrial (Mexican-style) tortilla-making equipment has facilitated and expedited tortilla making. Manually operated wooden tortilla presses of the past led to today's industrial tortilla machinery, which can produce up to 60,000 tortillas per hour. Tortillas are now not only made from maize meal, but also from wheat flour; home-made and store-bought tortillas are made in many flavors and varieties.

Tortillas remain a staple food in Mexico and Central America, and have gained popularity and market share elsewhere. In the U.S., tortillas have grown from an "ethnic" to a mainstream food. They have surpassed bagels and muffins, and have now become the number two packaged bread product sold in the U.S (behind sliced bread). The Tortilla Industry Association (TIA) estimates, in the U.S. alone, the tortilla industry (tortillas and their products – tortilla chips, tostada shells and taco shells) has become a US$6 billion a year industry.

The nutritional info for the Mission brand 49g wheat tortilla is:

Wheat flour tortillas have been used on many American spaceflights since 1985 as an easy solution to the problems of handling food in microgravity and preventing bread crumbs from escaping into delicate instruments.

In Northern Mexico and much of the United States, "tortillas" mean wheat-flour tortillas. They are the foundation of Mexican border cooking. Their popularity was driven by the low cost of inferior grades of wheat flour provided to border markets and by their ability to keep and ship well.

Tortilla art is the use of tortillas as a substrate for painting. Tortillas are baked and then covered in acrylic before they are painted.

Handmade Guatemalan and Salvadorean tortillas are thicker than Mexican ones. These are about 5mm thick and about 10cm in diameter, just like Mexican gorditas. Although they superficially resemble pupusas, they are quite different (burn marks, for instance, are different)

Tortillas in Central America sometimes differ somewhat from their Mexican counterparts, although are made similarly. In Guatemala and El Salvador, the tortillas are about 5 millimeters thick and about 10 centimeters in diameter, just like Mexican gorditas. Like the Mexican tortillas, the maize is soaked in a mixture of water and lime (or lye), then rinsed and ground. In El Salvador, they sometimes use sorghum (called maicillo there) to make tortillas when there is not enough maize. Also in El Salvador, there is a particularly large and thick tortilla called a "chenga" on top of which food is placed, like an edible plate, to serve food to the labourers in coffee plantations and farms.

Maize and wheat tortillas can often be found in supermarkets in El Salvador and Costa Rica produced by Mexican companies.

Tortillas are widely used in the United States, in recipes of Mexican origin and many others. As a testament to their popularity, the Tortilla Industry Association (TIA) estimated Americans consumed approximately 85 billion tortillas in 2000 (not including tortilla chips). They are more popular than all other ethnic breads such as English muffins, pita bread, and bagels.

Tortilla chips — made from maize tortillas cut into wedges, then fried — first gained popularity in the 1940s in Los Angeles, California and were mass-produced there. The ingredients in maize tortillas are maize, lime, and water. Fried chips add salt and vegetable oil.

Flour tortillas are commonly used in burritos. They are also used to make fajitas, wraps, sandwiches, quesadillas, casseroles and stews, and there are numerous other uses.

Many people from both Northern Mexico and throughout the Southwestern United States eat tortillas as a staple food. Many restaurants use wheat flour tortillas in a variety of non-Mexican and Mexican recipes. Many grocery stores sell ready-made tortillas.

All content from Kiddle encyclopedia articles (including the article images and facts) can be freely used under Attribution-ShareAlike license, unless stated otherwise. Cite this article:
Flour tortilla Facts for Kids. Kiddle Encyclopedia.