In North America, a corn tortilla or just tortilla is a type of thin, unleavened flatbread, made from hominy (nixtamalized maize (corn)). In Mexico, there are three colors of maize dough for making tortillas: white maize, yellow maize and blue maize (or black maize).

A similar bread from South America, called arepa (though arepas are made with ground maize, not hominy, and are typically much thicker than tortillas), predates the arrival of Europeans to America, and was called tortilla by the Spanish from its resemblance to the traditional Spanish round, unleavened cakes and omelettes (originally made without potatoes, which are native to South America). The Aztecs and other Nahuatl-speakers call tortillas tlaxcalli (); these have become the prototypical tortillas.

Maize kernels naturally occur in many colors, depending on the cultivar: from pale white, to yellow, to red and bluish purple. Likewise, corn meal and the tortillas made from it may be similarly colored. White and yellow tortillas are by far the most common, however.

Tortilla, from Spanish torta, cake, plus the diminutive -illa, literally means "little cake". Nahuatl tlaxcalli is derived from the verb (i)xca "to bake" with the help of the prefix tla- and two common suffixes -l- and -li (<-tli), that is "something baked".

Tortilla in Iberian Spanish also means omelette. As such, this wheat flour flatbread tortilla is not to be confused with the Spanish omelette or any other egg based one.

The corn tortilla originated from Mexico during pre-Columbian times, it has been a staple food in North American and Mesoamerican cultures. It predates the alternative wheat flour version of the tortilla (tortilla de harina or tortilla de trigo) in all such cultures, as wheat was not grown in the Americas prior to European colonization.

In Aztec times, two or three corn tortillas would be eaten with each meal, either plain or dipped in mole or a chili pepper and water sauce. Tortillas were also sold at Aztec marketplaces filled with turkey meat, turkey eggs, beans, honey, squash, prickly pears and chili pepper.

Analogous staple foods in New World cultures, made from hominy and serving a similar nutritional function, include the sope, the totopo, the gordita, and the tlacoyo of Mexico, and the pupusa of Central America. The arepa of northern South America, though similar, is made with ground maize, not hominy, and does not provide the same nutrition as foods made from hominy.

The tamal (or tamale) of Mexico is also made from nixtamal (Aztec word for hominy), but is much thicker and is a dish unto itself, usually including other ingredients and flavors, rather than a staple food used in other dishes. 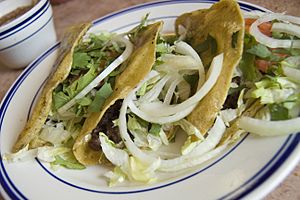 Maize has been a staple food for centuries. It is the most planted crop in the Mexican region. The country grows more than 42 different types of maize, each of which has several varieties whose number is estimated at more than 3,000 by the International Center for the Improvement of Maize and Wheat (CIMMYT). The characteristics of each variety depend upon soil conditions, humidity, altitude, and how cultivated. Some of the earliest evidence of maize cultivation suggests that domestication took place in several places at the same time.

Maize is the basis of most Mexican cuisine, with some exception in the culinary traditions of northern Mexico, where wheat is taking the place of maize as the cereal base. In Mexico, the primary use of maize is the tortilla, but it is also a principal ingredient in other foods including tamales and atole. The maize used for tortillas can be ripe and dry, but it is also consumed fresh and mature (maize), or soft and fresh (xilote).

Tortillas are consumed daily. Factory-made tortillas are widely sold, and they can easily be home-made. Tortilla production starts from early morning because lunch is the main meal of the day for most people. In Mexico, lunch is eaten between 1:30 p.m. and 3:30 p.m. Some supermarkets and grocery stores sell tortillas throughout the day.

Mexican and, more generally, Latin American dishes made with maize tortillas include:

A tortilla is made by curing maize in limewater in the nixtamalization process, which causes the skin of the corn kernels to peel off (the waste material is typically fed to poultry), then grinding and cooking it, kneading it into a dough called masa nixtamalera, pressing it flat into thin patties using a rolling pin or a tortilla press, and cooking it on a very hot comal (originally a flat terra cotta griddle, now usually made of light sheet-metal instead). The process, called nixtamalization, was developed indigenously by pre-Columbian cultures and predates European contact by many centuries, if not millennia. Soaking the maize in limewater is important because it makes available the B vitamin niacin and the amino acid tryptophan. When maize was brought to Europe, Africa and Asia from the New World, this crucial step was often omitted. Those whose diet consisted mostly of corn meal often became sick — because of the lack of niacin and tryptophan — with the deficiency disease pellagra, which was common in Spain, Northern Italy, and the southern United States.

In Mexico, particularly in the towns and cities, corn tortillas are often made nowadays by machine and are very thin and uniform, but in many places in the country, they are still made by hand, even when the nixtamal is ground into masa by machine. Corn tortillas are customarily served and eaten warm; when cool, they often become rubbery or grainy as the cooked starches stale. The largest tortilla producer in the world is the Mexican company Gruma, headquartered in Monterrey.

Traditionally throughout Mesoamerica from pre-Hispanic times into the mid-20th century, the masa was prepared by women using a mano (a cylinder-shaped stone like a rolling pin) and metate (a stone base with a slightly concave top for holding the corn). This method is still used in some places in Mexico.

The wheat flour tortilla was an innovation after wheat was brought to the New World from Spain while this region was the colony of New Spain. It is made with an unleavened, water-based dough, pressed and cooked like corn tortillas. These tortillas are very similar to the unleavened bread popular in Arab, eastern Mediterranean and southern Asian countries, though thinner and smaller in diameter. In China the laobing (烙餅), a thick circular "pancake", is similar to the tortilla. The Indian roti, which is made essentially from wheat flour, is another example.

Tortillas vary in size from about 6 to over 30 cm (2.4 to over 12 in), depending on the region of the country and the dish for which it is intended. Among tortilla variants (without being, strictly speaking, tortillas) there are pupusas, pishtones, gorditas, sopes, and tlacoyos. They are smaller, thicker versions to which beans, chicharrón, nopales or other ingredients have been added. They are customarily cooked on a greased pan.

In Nicaragua, a type of tortillas called güirilas are also consumed. They are made from young white corn. Güirilas are thick, sweet and filling. They are eaten alone, with cuajada and cream, meat, or accompanying a dish. In Argentina, Bolivia and southern Chile, the size of the tortillas is smaller. They are generally saltier, made from wheat or corn flour, and roasted in the ashes of a traditional adobe oven. This kind of tortilla is called sopaipilla (not to be confused with a puffy frybread of the same name common in the United States). In Chile and Argentina, it may also be sweetened after being cooked by boiling in sugar water.

In commercial production and even in some larger restaurants, automatic machines make tortillas from dough. A tortilla seller is, in Nahuatl languages: tlaxcalnamacaccode: nah is deprecated or Spanish: tortillero.

An uncooked corn tortilla made with nixtamalised corn at 46% hydration and depending on corn variety used and variations, consists of 45% carbohydrates, 3% fat, and 6% protein (table). In a 100 gram reference amount, a raw corn tortilla supplies 218 calories and is a rich source (20% or higher of the Daily Value, DV) of phosphorus (45% DV) and magnesium (20% DV). It is a moderate source (10-19% DV) of vitamin B6, niacin, manganese, and zinc (table).

Corn tortillas are the basis of many traditional Mexican dishes, such as tacos, tostadas, enchiladas, flautas, quesadillas, chilaquiles, and tortilla soup (sopa de tortilla). Warmed corn tortillas are also often served as an accompaniment to stews, soups, grilled meats and other dishes, as bread might be served in other cuisines. By contrast, wheat flour tortillas are often used for burritos and quesadillas, particularly in the United States. Corn tortillas may also be deep fried to make crisp tortilla chips. These are often salted, and can be eaten alone or accompanied with various salsas and dips such as guacamole. Tortilla chips are a key ingredient in nachos.

All content from Kiddle encyclopedia articles (including the article images and facts) can be freely used under Attribution-ShareAlike license, unless stated otherwise. Cite this article:
Corn tortilla Facts for Kids. Kiddle Encyclopedia.