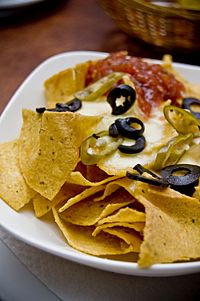 Nachos are a snack food made with tortilla chips and cheese. Sometimes they have jalapeños, sauce or meat on them.

Nachos were invented in 1943 by Ignacio "Nacho" Anaya. Anaya worked at a restaurant called the Victory Club in Piedas Negras, Coahuila, Mexico. One night, the wives of several soldiers from nearby Fort Duncan arrived at the restaurant after it had closed for the day. Anaya cut some corn tortillas into slices and topped them with cheese and sliced jalapeño peppers to make a snack for the women. He called the dish "Nacho's special." Eventually it came to be known simply as "nachos." Nachos are most popular in Mexico.

Nachos originated in the city of Piedras Negras, Coahuila, Mexico, just over the border from Eagle Pass, Texas. In 1943, the wives of U.S. soldiers stationed at Fort Duncan in nearby Eagle Pass were in Piedras Negras on a shopping trip, and arrived at the restaurant after it had already closed for the day. The maître d'hôtel, Ignacio "Nacho" Anaya, created a new snack for them with what little he had available in the kitchen: tortillas and cheese. Anaya cut the tortillas into triangles, fried them, added shredded cheddar cheese, quickly heated them, added sliced pickled jalapeño peppers, and served them.

When asked what the dish was called, he answered, "Nacho's especiales". As word of the dish traveled, the apostrophe was lost, and Nacho's "specials" became "special nachos". 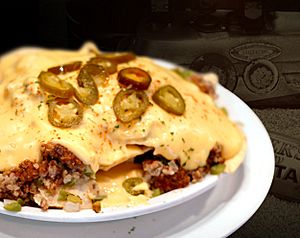 The popularity of the dish swiftly spread throughout Texas and the Southwest. The first known appearance of the word "nachos" in English dates to 1950, from the book A Taste of Texas. According to El Cholo restaurant history, waitress Carmen Rocha is credited with making nachos in San Antonio, Texas, before introducing the dish to Los Angeles at El Cholo Mexican restaurant in 1959.

A modified version of the dish, with cheese sauce and prepared tortilla chips, was marketed in 1976 by Frank Liberto, owner of Ricos Products, during Texas Rangers baseball games at Arlington Stadium in Arlington, Texas. This version became known as "ballpark nachos". During the September 4, 1978 Monday Night Football game between the Baltimore Colts and Dallas Cowboys, sportscaster Howard Cosell enjoyed the name "nachos", and made a point of mentioning the dish in his broadcasts over the following weeks, further popularizing it and introducing it to a whole new audience.

Ignacio Anaya died in 1975. In his honor, a bronze plaque was erected in Piedras Negras, and October 21 was declared the International Day of the Nacho. Anaya's son, Ignacio Anaya, Jr., served as a judge at the annual nacho competition until his death in 2010. 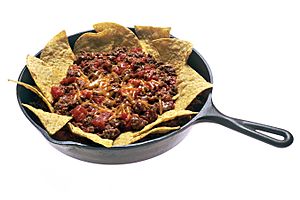 Nachos with beef, beans, and cheese

A variation consists of a quartered and fried tostada topped with a layer of refried beans and/or various meats and a layer of shredded cheese or nacho cheese, topped with habanero hot sauce.

Traditional nachos consist of the tortilla chips topped with cheese and jalapenos, as done by Anaya who created "nachos". The modern form of nachos has several possible ingredients with the most common toppings being, cheese, guacamole, salsa, sour cream, jalapenos, and sometimes lettuce. Lettuce is a less common topping, if added at all. The topping of the greatest quantity is often the cheese.

Nachos vary from the modern style served in restaurants to the quick and easy nachos sold at concession stands in stadiums. The nachos sold at concession stands consists of tortilla chips topped with pump-able cheese sauce. The cheese sauce comes in condensed form to which water or milk and pepper juice are added. What is contained in the condensed form itself is a trade secret. Another variation of nachos is "dessert nachos". These vary widely, from cinnamon and sugar on pita chips to "s'more nachos" with marshmallow and chocolate on graham crackers, and typically refer to a dessert consisting of scattered toppings on some form of crispy base. 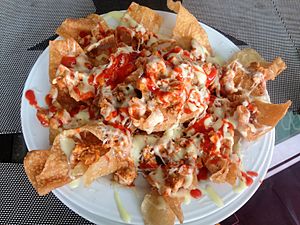 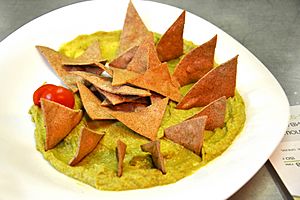 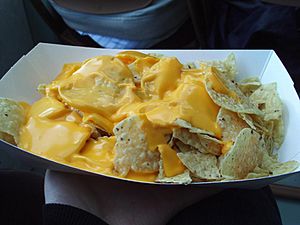 Nachos with an abundance of toppings are sometimes called "loaded nachos", "super nachos", or "epic nachos". This type of dish is usually served as an appetizer at bars or restaurants in the United States and elsewhere. Typically, the tortilla chips are arranged on a platter, meat and refried bean toppings are then added, and the entire platter is smothered with shredded cheese. The platter is then put into a broiler or microwave to cause the cheese to melt. The platter is then covered with the cold toppings (shredded lettuce, tomatoes, salsa, jalapeños, etc.) and served immediately.

In Memphis, Tennessee, barbecue nachos are served in most barbecue restaurants, and also at sporting events. Generous portions of barbecued pork shoulder are placed atop tortilla chips, then covered with melted cheese or nacho cheese, barbecue sauce, and sliced jalapeño peppers.

A similar dish that involves tortilla chips and cheese is found in Tex-Mex restaurants. Small bowls of chili con queso and/or, more commonly, salsa, are served with baskets of warm tortilla chips as appetizers.

All content from Kiddle encyclopedia articles (including the article images and facts) can be freely used under Attribution-ShareAlike license, unless stated otherwise. Cite this article:
Nachos Facts for Kids. Kiddle Encyclopedia.