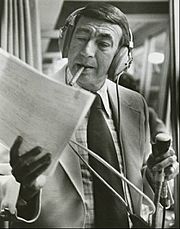 Howard William Cosell (March 25, 1918 – April 23, 1995) was an American sports journalist, movie and television actor, and writer. He was known for his sports announcing and for his roles in Saturday Night Live with Howard Cosell, Bananas, Fol-de-Rol, and in Sleeper.

All content from Kiddle encyclopedia articles (including the article images and facts) can be freely used under Attribution-ShareAlike license, unless stated otherwise. Cite this article:
Howard Cosell Facts for Kids. Kiddle Encyclopedia.