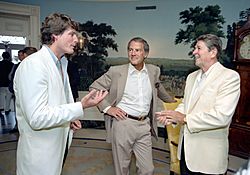 Francis Newton "Frank" Gifford (August 16, 1930 – August 9, 2015) was an American football player and television sportscaster. He was known for broadcasting on Monday Night Football. Gifford played for the New York Giants from 1952 through 1964. He was born in Santa Monica, California.

On August 9, 2015, Gifford died from a heart attack at his home in Greenwich, Connecticut, aged 84. He is survived by his wife of 29 years Kathie Lee Gifford. He suffered from Chronic traumatic encephalopathy.

All content from Kiddle encyclopedia articles (including the article images and facts) can be freely used under Attribution-ShareAlike license, unless stated otherwise. Cite this article:
Frank Gifford Facts for Kids. Kiddle Encyclopedia.