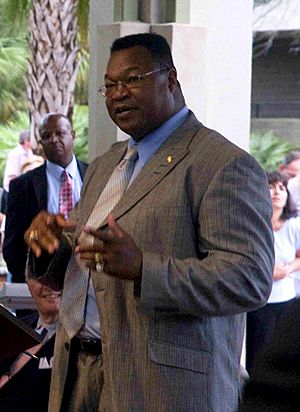 Larry Holmes (born on November 3, 1949) was an American boxer. He held the world heavyweight championship from 1978 to 1985. Holmes fought out of Easton, Pennsylvania. He was nicknamed the "Easton Assassin."

Holmes won the vacant World Boxing Council championship from Ken Norton in 1979. He defended that title, and later the International Boxing Federation title, twenty times. Some notable fighters he beat in defense of his championship were Muhammad Ali, Leon Spinks, Gerry Cooney, and Tim Witherspoon. He lost his championship to Michael Spinks in 1985.

Holmes later fought Mike Tyson and then Evander Holyfield to try and win back the championship. Tyson knocked him out in the fourth round and Holyfield beat him by a twelve-round decision.

Holmes continued to fight until 2002.

All content from Kiddle encyclopedia articles (including the article images and facts) can be freely used under Attribution-ShareAlike license, unless stated otherwise. Cite this article:
Larry Holmes Facts for Kids. Kiddle Encyclopedia.