Cuthbert is a city in, and the county seat of, Randolph County, Georgia, United States. The population was 3,731 at the 2000 census.

Cuthbert was founded by European Americans in 1831 as seat of the newly formed Randolph County, after Indian Removal of the historic tribes to Indian Territory west of the Mississippi River. John Alfred Cuthbert, member of Congress, is its namesake. The county was developed for cotton plantations, the major commodity crop, and the rural area had a high proportion of enslaved African-American workers. Cuthbert was incorporated as a town in 1834 and as a city in 1859, serving as the trading center for the area. The Central of Georgia Railway arrived in Cuthbert in the 1850s, stimulating trade and growth, and providing a means of getting cotton and other crops to market.

According to the United States Census Bureau, the city has a total area of 3.0 square miles (7.8 km2), all land. 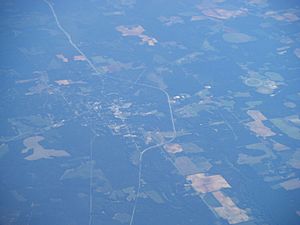 There were 1,360 households out of which 29.8% had children under the age of 18 living with them, 30.7% were married couples living together, 29.4% had a female householder with no husband present, and 36.0% were non-families. 33.8% of all households were made up of individuals and 16.5% had someone living alone who was 65 years of age or older. The average household size was 2.52 and the average family size was 3.24.

Cuthbert is home to Andrew College (formerly Andrew Female College), a two-year private liberal arts college. The Fletcher Henderson Museum is being established in Cuthbert in honor of the 20th-century jazz musician and orchestra arranger.

The city has notable sites such as a Confederate Army cemetery, historical houses built in the 1800s, and the Fletcher Henderson home. In 2007 an announcement was made of a museum to be dedicated to late resident Lena Baker and issues of racial justice. Baker was an African-American maid who was convicted of capital murder in 1945 in the death of a white man. She had claimed self-defense, and in 2005 the state posthumously pardoned her.

All content from Kiddle encyclopedia articles (including the article images and facts) can be freely used under Attribution-ShareAlike license, unless stated otherwise. Cite this article:
Cuthbert, Georgia Facts for Kids. Kiddle Encyclopedia.