Albany is a city in the U.S. state of Georgia, and is the seat of Dougherty County. Located in southwest Georgia, it is the principal city of the Albany, Georgia metropolitan area. The population was 77,434 at the 2010 U.S. Census, making it the eighth-largest city in the state.

The area where Albany is located was formerly inhabited by the Creek Indians, who called it Thronateeska after their word for "flint" because of the mineral flint that was found near the river. The Creeks used this flintstone to make tools and weapons such as arrowheads. 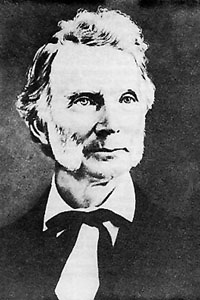 American settlement began with Nelson Tift, from Groton, Connecticut, who took land along the Flint River in October 1836 after Indian removal. The Creek were forced to relocate to Indian Territory west of the Mississippi River. Tift named his new town Albany after the capital of New York; both were located at the navigable heads of rivers. Alexander Shotwell laid out the town in 1836. It was incorporated as a city by an act of the General Assembly of Georgia on December 27, 1838.

Tift for decades was the city's leading entrepreneur. An ardent booster, he promoted education, business, and railroad construction. During the Civil War he provided naval supplies and helped build two ships. He opposed Radical Reconstruction inside the state and in Congress, and was scornful of the Yankee carpetbaggers who came in. John Fair concludes that Tift became "more Southern than many natives." His pro-slavery attitudes before the war and his support for segregation afterward made him compatible with Georgia's white elite.

The area was developed by planters using slave labor for clearing land and cotton cultivation. By 1840, Dougherty County's majority population was black, composed overwhelmingly of slaves. The market center for cotton plantations, Albany was in a prime location for shipping cotton to markets by steamboats on the river. In 1858, Tift hired Horace King, a former slave and bridge builder, to construct a toll bridge over the river. King's bridge toll house still stands.

Already important as a shipping port, Albany later became an important railroad hub in southwestern Georgia. Seven lines were constructed to the town. An exhibit on trains is located at the Thronateeska Heritage Center in the former railroad station.

While integral to the economic life of the town, the Flint River has flooded regularly. There was extensive property damage in 1841 and 1925. Some late twentieth-century floods were extreme. In 1994, a severe flood was caused by rainfall from Tropical Storm Alberto; it killed 14 people and displaced 22,000. The state supported a $150 million renovation of the Albany State University campus to repair storm damage and accomplish upgrades. New housing was built on the south side of town to replace what had been destroyed. In 1998, the Flint River crested at 35 feet (11 m) above its bed and flooded parts of the city.

Because of flooding, the city has decided against redeveloping areas along the riverfront floodplain for commercial or residential purposes. It is being improved for other uses, with a riverfront walkway and a new aquarium built over a tributary creek.

On April 11, 1906, the Carnegie Library, created by matching funds from the philanthropist Andrew Carnegie, was opened downtown. Originally a segregated facility under Jim Crow laws, it was not open to African Americans until after the passage of the Civil Rights Act of 1964. It functioned as a library through 1985. In 1992, after renovation, the building was reopened as the headquarters of the Albany Area Arts Council.

In 1912, the downtown U.S. Post Office and Courthouse building opened. Other federal projects have been important to the city and region. In 1937, Chehaw Park was constructed as a part of a New Deal program under the administration of President Franklin D. Roosevelt during the Great Depression.

Major changes came with the expansion of military facilities in the city. A U.S. Army Air Corps training base was built near Albany on land owned by the city and leased to the Air Corps for $1 a year. Construction of the base and airfield by the Army Corps of Engineers began on March 25, 1941. The airfield was temporarily deactivated after World War II between August 15, 1946, and September 1, 1947.

After the beginning of the Cold War and the founding of the U.S. Air Force in late 1947, the airfield was reactivated and upgraded with runways for a U.S. Air Force base. It was named Turner Air Force Base. The Air Force used this base for heavy bomber jets, such as the B-52 Stratofortress. A number of other Air Force units were also housed at this base.

In 1951, the U.S. Marine Corps established a logistics base on the eastern outskirts of Albany. During the 1950s and 1960s, so many white servicemen and associated workers arrived that the town briefly became majority white for the first time since 1870. In 1960, the population of Albany reached 50,000 people.

In 1961–1962, African Americans in Albany played a prominent role in the Civil Rights Movement (see the Albany Movement). They led protests and non-violent demonstrations to end segregation of public facilities, gain the ability to vote, and restore their dignity. Assisted by activists from SCLC, CORE, SNCC, and the NAACP, African Americans and supporters took a stand to fight segregation through nonviolence. The city repealed its Jim Crow laws in 1963, but it took federal legislation to secure the franchise.

In 1967, the Air Force closed all its operations at the base, which was transferred to the U.S. Navy and renamed Naval Air Station Albany. NAS Albany was used as the shore base of nearly all the Navy's RA-5C Vigilante twin-jet, carrier-based reconnaissance aircraft. The base was closed and the property was returned to the city in 1974.

In 1979, the Miller Brewing Company purchased part of the old naval base's property to build a new brewery.

The decline in military bases and railroad restructuring led to job losses. Much of the remaining white population moved to suburbs and newer housing out of the city, which became majority African American in the 1970s.

During the mid afternoon of January 22, 2017, a large, violent tornado passed through the area again, claiming 4 lives in the process, and destroying mobile home parks in the process.

Albany lies in the Upper Coastal Plain of Georgia.

As of 2010[update], the City of Albany had been a member of the Arbor Day Foundation's Tree City USA Program for 23 years. Tree-lined streets are common, with large, mature oaks and other native trees. The city has a Tree Ordinance and a certified arborist on staff. 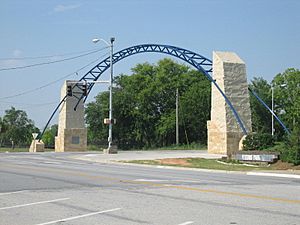 The City of Albany's Recreation and Parks Department provides a diverse and comprehensive system of 77 park facilities throughout the City of Albany, including the following:

Albany's Garden Club was established in 1996 and is located on the northeast side of Hillsman Park in the Palmyra Heights neighborhood.

Albany's Riverfront Trail is a 3.1-mile (5.0 km) paved trail along the Flint River that connects Riverfront Park in downtown Albany to the Cox Landing Boat Ramp in northeast Albany, near Chehaw Park. The Oxford Environmental Park Nature Trail is an offshoot of the trail, which provides information about the ecological features of the area.

The climate in this area is characterized by hot, humid summers and generally mild to cool winters. According to the Köppen Climate Classification system, Albany has a humid subtropical climate, abbreviated "Cfa" on climate maps. Albany receives well above the national average amount of precipitation. Much of this comes in the form of heavy showers and thunderstorms. According to "Cities Ranked and Rated" (Bert Sperling and Peter Sander), Albany reports thunder on 86 days per year. This is more than twice the national average.

According to the United States Census Bureau, the Albany, Georgia Metropolitan Statistical Area (MSA) had an estimated population of 157,308 and ranked 252nd in the U.S. in 2010. The MSA consists of Dougherty, Terrell, Lee, Worth, and Baker Counties. 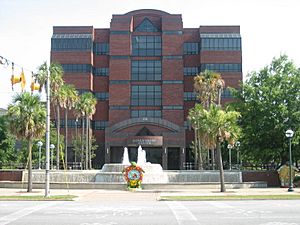 Of the 29,781 total households, 29.2% had children under the age of 18 living with them, 29.7% were married couples living together, 27.7% had a female householder with no husband present, and 37.8% were non-families. Households of individuals living alone made up 31.8% of the total, and 9.4% were someone living alone who was 65 years of age or older. The average household size was 2.46 and the average family size was 3.11.

Museums and the arts 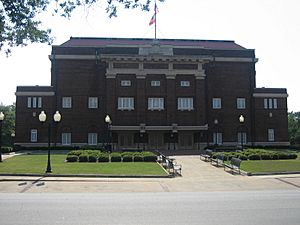 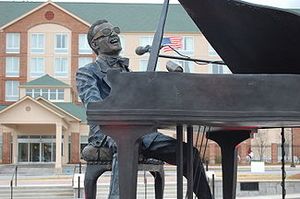 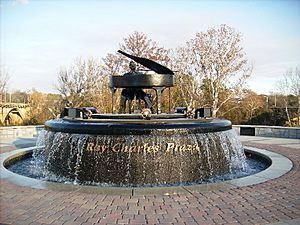 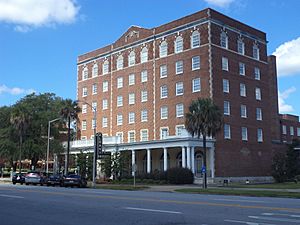 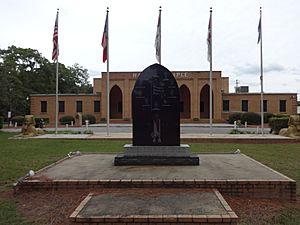 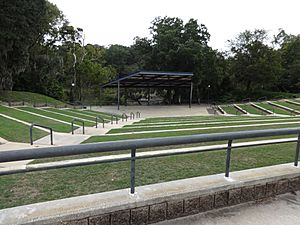 City races include a 26.2-mile (42.2 km) full marathon or a 13.1-mile (21.1 km) half marathon, and is ranked as one of the top Boston qualifiers in the country, with almost 20% of all marathon finishers qualifying.

The annual Mardi Gras Street Festival takes place in downtown Albany the first weekend of March. Starting at noon and running until midnight, the festival coincides with the marathon and half marathon.

East Albany is a district of Albany.

East Albany is located in a triangle between the Flint River, The Liberty Express Way, and Oglethorpe Boulevard. Its main road is East Broad Avenue.

It is segregated from the rest of the city by the Flint River and the large highways that surround it. The area has little economic activity, and thus poverty is widespread. As of 2000[update], the poverty rate was at 45.3%, and the median household income was $19,601.00. The population was 10,547 people, 90.9% of whom were African Americans. 33.9% of the people were under the age of 18, and 40.9% of these belonged to single parent households. The district supported 1.1% of the population who were born outside of the U.S. The education rate was low, with 41.0% of adults being without a high school diploma. Only 5.8% of people had a college degree. Unemployment was at 18.6%. Home ownership rate was at 36.7%.

All content from Kiddle encyclopedia articles (including the article images and facts) can be freely used under Attribution-ShareAlike license, unless stated otherwise. Cite this article:
Albany, Georgia Facts for Kids. Kiddle Encyclopedia.