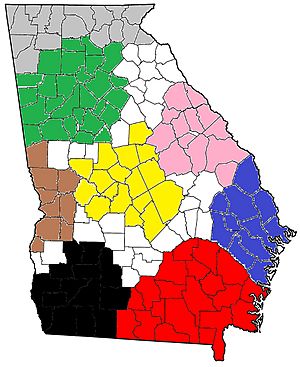 Map of the many regions of Georgia. Southwest Georgia in Black. The Atlanta Metropolitan Area in Green, North Georgia in Gray, The Chattahoochee Valley in Brown, Central Georgia in Yellow, The Central Savannah River Area in Pink, Southeast Georgia in Red, Coastal Georgia in Blue

Southwest Georgia is a fourteen-county region in the U.S. state of Georgia. It has a 2010 census population of 496,433, and is the least populated region in Georgia, just slightly behind Southeast Georgia. Additionally, the area has historically been the poorest region of the state since at least 1995, when over 25% of the residents were in poverty.

It is commonly referred to as SOWEGA, pronounced "Sow WEE guh".

Southwest Georgia is anchored by Albany, the most populous city and region's sole metropolitan area.

All content from Kiddle encyclopedia articles (including the article images and facts) can be freely used under Attribution-ShareAlike license, unless stated otherwise. Cite this article:
Southwest Georgia Facts for Kids. Kiddle Encyclopedia.