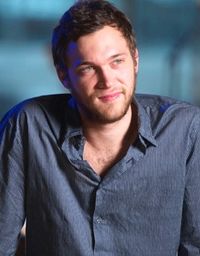 Phillip LaDon Phillips Jr. (born September 20, 1990) is an American singer, songwriter and actor. He won the eleventh season of American Idol on May 23, 2012. His coronation song, "Home", became the best-selling song in American Idol history. He has released three studio albums.

Phillips was born in Albany, Georgia. He is married to Hannah Blackwell. The couple have a child.

All content from Kiddle encyclopedia articles (including the article images and facts) can be freely used under Attribution-ShareAlike license, unless stated otherwise. Cite this article:
Phillip Phillips Facts for Kids. Kiddle Encyclopedia.