Leesburg is a city in Lee County, Georgia, United States. The population was 2,896 at the 2010 census, up from 2,633 at the 2000 census. The city is the county seat of Lee County and is part of the Albany, Georgia Metropolitan Statistical Area.

Leesburg, originally known as Wooten Station, was founded in 1870 as the Central of Georgia Railway arrived into the area. In 1872, the town was renamed Wooten and the seat was transferred from Starksville. In 1874, the town was incorporated and renamed again to its present form of Leesburg.

Leesburg was the site of a malaria research station established by the International Health Board in 1924. 74 African American children were selected for study with splenic enlargement, a sign of malaria.

Leesburg is the site of the infamous Leesburg Stockage incident, in which a group of African-American teenage and pre-teen girls were arrested for protesting racial segregation in Americus, Georgia, and were imprisoned without charges for 45 days in poor conditions in the Lee County Public Works building.

There were 796 households, out of which 49.0% had children under the age of 18 living with them, 47.1% were married couples living together, 26.4% had a female householder with no husband present, and 23.1% were non-families. 20.7% of all households were made up of individuals, and 7.8% had someone living alone who was 65 years of age or older. The average household size was 2.81 and the average family size was 3.24. 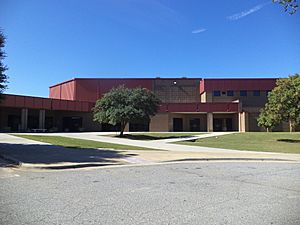 All content from Kiddle encyclopedia articles (including the article images and facts) can be freely used under Attribution-ShareAlike license, unless stated otherwise. Cite this article:
Leesburg, Georgia Facts for Kids. Kiddle Encyclopedia.