John Clayton Mayer (born October 16, 1977) is an American singer, songwriter, guitarist, and record producer. Born in Bridgeport, Connecticut, Mayer attended Berklee College of Music in Boston, but left and moved to Atlanta in 1997 with Clay Cook. Together, they formed a short-lived two-man band called Lo-Fi Masters. After their split, Mayer continued to play local clubs, refining his skills and gaining a following. After his appearance at a 2001 South by Southwest Festival, he was signed to Aware Records, and eventually to Columbia Records, which released his first extended play Inside Wants Out. His following two studio albums—Room for Squares (2001) and Heavier Things (2003)—performed well commercially, achieving multi-platinum status. In 2003, he won the Grammy Award for Best Male Pop Vocal Performance for his single "Your Body Is a Wonderland".

By 2005, Mayer had moved away from the acoustic music that characterized his early records, and begun performing the blues and rock music that had originally influenced him as a musician. He collaborated with blues artists such as B. B. King, Buddy Guy, and Eric Clapton. Forming the John Mayer Trio, he released a live album, Try!, in 2005 and his third studio album Continuum in 2006. Both albums received positive reviews, and Continuum earned Mayer a 2007 Grammy Award for Best Pop Vocal Album. He also won Best Male Pop Vocal Performance for "Waiting on the World to Change". That album was followed by Battle Studies in 2009, a return to pop, with a Battle Studies World Tour.

After having several controversial incidents with the media, Mayer withdrew from public life in 2010 and began work on his fifth studio album, Born and Raised, which drew inspiration from the 1970s pop music of Laurel Canyon. However, the discovery of a granuloma on his vocal cords delayed the release of the album until May 2012, and forced him to cancel the planned tour. The album received a generally favorable reception, though was less commercially successful than his previous work. Mayer began performing as a singer again in January 2013, and that year released his sixth studio album, Paradise Valley, which incorporates country music influences. By 2014, he had sold a total of over 20 million albums worldwide. His latest album, The Search for Everything, was released in 2017.

In 2015, three former members of the Grateful Dead joined with Mayer and two other musicians to form the band Dead & Company. It is the latest of several reunions of the band's surviving members since Jerry Garcia's death in 1995. The band remains active and its tours have been well received.

Mayer's secondary career pursuits extend to television hosting, comedy, and writing; he has authored columns for magazines such as Esquire. He supports various causes and has performed at charity benefits. He is a watch aficionado (with a collection he values in the "tens of millions" of dollars), contributing to the watch site Hodinkee, and has been on the jury at the Grand Prix d'Horlogerie de Genève.

Mayer was born to Richard (a high-school principal) and Margaret Mayer (a middle-school English teacher). He grew up in nearby Fairfield, the middle child between older brother Carl and younger brother Ben. His father is Jewish, and Mayer has said that he relates to Judaism. As a middle school student, Mayer became close friends with future tennis star James Blake, and they often played Nintendo together after school. He attended the Center for Global Studies at Brien McMahon High School in Norwalk for his junior year (then known as the Center for Japanese Studies Abroad, a magnet program for learning Japanese).

After watching Michael J. Fox's guitar performance as Marty McFly in Back to the Future, Mayer became fascinated with the instrument. When he turned 13, his father rented one for him. A neighbor gave Mayer a Stevie Ray Vaughan cassette, which cultivated Mayer's love of blues music. According to Mayer, his fascination with Vaughan started a "genealogical hunt" that led him to other blues guitarists, including Buddy Guy, B.B. King, Freddie King, Albert King, Otis Rush and Lightnin' Hopkins. 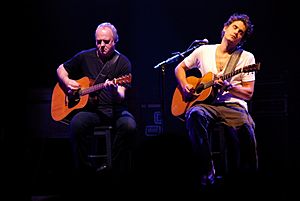 Mayer started taking lessons from a local guitar-shop owner, Al Ferrante, and soon became consumed. After two years of practice, he started playing at bars and other venues, while still in high school. In addition to performing solo, he was a member of a band called Villanova Junction (named for a Jimi Hendrix song) with Tim Procaccini, Joe Beleznay and Rich Wolf.

When Mayer was seventeen, he was stricken with cardiac dysrhythmia and was hospitalized for a weekend. Reflecting on the incident, Mayer said, "That was the moment the songwriter in me was born", and he penned his first lyrics the night he left the hospital. 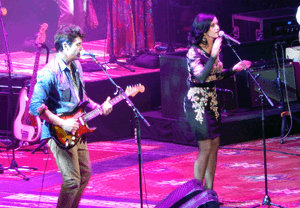 John Mayer and Katy Perry performing "Who You Love" at Barclays Center in Brooklyn, New York

In 2002, Mayer created the "Back to You" Fund, a nonprofit organization that focuses on fundraising in the areas of health care, education, the arts and talent development. The foundation auctions exclusive John Mayer items, such as guitar picks, T-shirts and signed CDs. The auctions have been successful, with some tickets selling for more than seventeen times their face value.

Mayer performed at a number of benefits and telethons for charity throughout his career. He has participated in benefits for the Elton John AIDS Foundation. In response to the Virginia Tech massacre, Mayer (along with Dave Matthews Band, Phil Vassar, and Nas) performed a free concert at Virginia Tech's Lane Stadium on September 6, 2007. followed by an appearance with Rob Thomas at the Annual Holiday Concert at Blythedale Children's Hospital in Valhalla that winter. 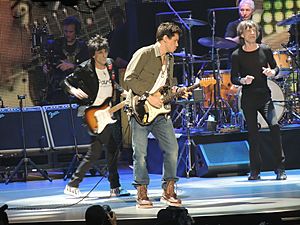 On December 8, 2007, Mayer hosted the first annual Charity Revue, a tradition he has continued each year. Charities who have benefited from the concerts include Toys for Tots, Inner City Arts and the Los Angeles Mission. CDs and DVDs of the first concert were released under the title Where the Light Is in July 2008. Mayer appeared on Songs for Tibet: The Art of Peace, a celebrity initiative to support Tibet and the 14th Dalai Lama, Tenzin Gyatso. Mayer (along with Keith Urban) headlined Tiger Jam 2011 in Las Vegas to help raise around $750,000 for the Tiger Woods Foundation.

In January 2013, Mayer participated with Zac Brown in a benefit concert in Bozeman, Montana where they raised more than $100,000 for firefighters who battled a wildfire in the summer of 2012 in Paradise Valley that destroyed 12,000 acres.

All content from Kiddle encyclopedia articles (including the article images and facts) can be freely used under Attribution-ShareAlike license, unless stated otherwise. Cite this article:
John Mayer Facts for Kids. Kiddle Encyclopedia.