The George R. Moscone Convention Center (pronounced), popularly known as the Moscone Center, is the largest convention and exhibition complex in San Francisco, California. The complex consists of three main halls spread out across three blocks and 87 acres (35 ha) in the South of Market neighborhood. The convention center originally opened in 1981. It is named after San Francisco former mayor George Moscone, who was assassinated in November 1978. 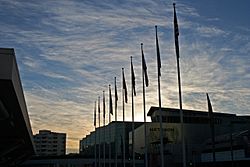 The South of Market Area where Moscone Center was built was claimed by the San Francisco Redevelopment Agency, and a protracted battle was fought by the displaced low-income residents during the 1960s and 1970s.

Although the Center is named after the murdered mayor, Moscone initially opposed the development of the area when he served on the SF Board of Supervisors in the 1960s because he felt it would displace elderly and poor residents of the area. As mayor, Moscone convened a special committee of proponents and opponents of a convention center. Hearings were held throughout SF seeking citizen input. A compromise was reached which was supported by Moscone. He put the matter on the ballot in November 1976 and it passed overwhelmingly.

The original Moscone Convention Center hall opened in 1981 on the site of what is now known as Moscone South. It was designed by a team at Hellmuth, Obata & Kassabaum led by Bill Valentine. The exhibition hall was placed underground to minimize the controversial convention center's visible footprint.

Moscone Center was featured in the 1995 movie The Net, with Sandra Bullock.

Moscone North and South underwent a two-year renovation project completed in 2012. The renewal project was designed by HOK, the center's original architect. A $551 million expansion project is underway, scheduled for completion in December 2018. The aboveground portions of Moscone South have been demolished and replaced by a more spacious structure. Moscone North was also renovated. The expansion project was designed by Skidmore, Owings & Merrill in collaboration with Mark Cavagnero Associates.

Moscone North and South are connected by a pedestrian bridge over Howard Street, as well as by the underground exhibition hall, which extends far beyond the aboveground structures and beneath Yerba Buena Gardens and the Metreon entertainment center. The massive underground hall has been described as a bunker. Together, Moscone North and South have 504,000 square feet (46,800 m2) of contiguous exhibition space, two ballrooms, 82 meeting rooms, and 107,000 square feet (9,900 m2) of pre-function lobby space.

A large solar electricity system was installed on the roof of the center in March 2004 by PowerLight Corporation. The installation of this system marked San Francisco's first major step towards obtaining all municipal energy from pollution-free sources. With the 60,000-square-foot (5,600 m2) solar array (675 kW capacity) in place, San Francisco boasts one of the largest city-owned solar installations in the country. The electricity generated by the solar system, combined with savings from energy efficiency measures, delivers the equivalent energy to power approximately 8,500 homes.

The location of the complex in the South of Market area provides easy access to downtown San Francisco's many hotels and restaurants, as well as major transportation systems. The center is two blocks away from the Powell Street station, which is served by both BART and Muni Metro. When complete, the Yerba Buena/Moscone station will also bring Muni Metro service to the southwestern corner of the convention center complex and provide connectivity with Caltrain. An Amtrak Thruway Motorcoach stop at Moscone Center (station code SFM) also transports riders to the Emeryville Amtrak station along the Capitol Corridor line.

Labor organizations supported the construction of the Center, and were granted full labor jurisdiction. All labor in the Convention Center is performed by I.A.T.S.E. Local 16 Stagehands, Sign and Display Workers Local #510, Brotherhood of Teamsters local #65, IBEW Local #6, Security I.A.T.S.E. Local #B-18, Communications Workers of America, and the Hotel & Restaurant Workers Local #2. Projection Presentation Technology is the on-site rental service. 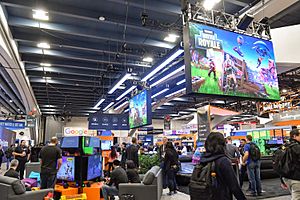 The Fortnite Battle Royale booth at the 2018 Game Developers Conference.

Moscone Center hosts a number of annual professional gatherings, including:

In addition, Moscone Center hosts public gated events such as the SF Auto Show and the Fancy Foods Show. 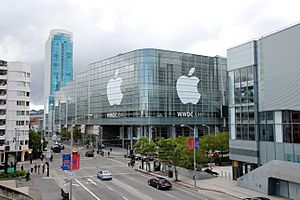 Other notable events at the convention center have included:

All content from Kiddle encyclopedia articles (including the article images and facts) can be freely used under Attribution-ShareAlike license, unless stated otherwise. Cite this article:
Moscone Center Facts for Kids. Kiddle Encyclopedia.