His father was Jose Ramon Garcia, a Spanish immigrant. His mother, Ruth Marie Clifford, named him after her favorite composer, Jerome Kern. His father was a jazz musician who bought a bar. As a child Garcia took piano lessons.

When he was four he lost part of a finger chopping wood. A year later his father drowned. When his mother took over the bar, Garcia went to live with his grandparents. They introduced him to the Grand Ole Opry. This along with his brother's collection of Chuck Berry records gave him an interest in country music.

In 1953 his mother remarried and Garcia moved back with her. Garcia attended several different schools in and around San Francisco. But he had little interest in school until 1957 when he attended the California School of Fine Arts (now the San Francisco Art Institute).

At age 15 his mother gave him a guitar. In high school he played in several bands. At age 17 he quit school. He joined the Army in 1960 but was given a general discharge a few months later.

Garcia returned to San Francisco. He spent time teaching acoustic guitar and playing bluegrass music. He met up with poet Robert Hunter. Together they started playing in the city's coffeehouses. Hunter later became the lyricist for the Grateful Dead and Garcia's lifelong songwriting partner. Garcia started becoming famous around San Francisco between 1962 and 1964. He was known for his Folk and bluegrass performances.

Musically he began experimenting outside the basic folk music formula and trying out new styles of music. This included jug band, Mother McCree's Uptown Jug Champions. A year later they changed their name to the "Warlocks". 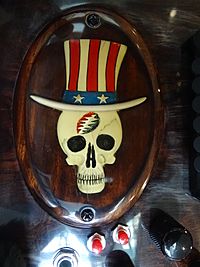 The Warlocks soon became the Grateful Dead. Garcia found the name in a dictionary. While Garcia was the frontman, the band always operated as a leaderless democracy. Garcia continued to experiment musically. He became known for his extended guitar improvisations. He also worked on numerous side projects and frequently sat in with other groups. Jefferson Airplane, in their 1967 album Surrealistic Pillow, credited him as the group's "spiritual adviser". In 1969, he and John "Marmaduke" Dawson founded the country rock band New Riders of the Purple Sage. The New Riders, or NRPS, became the opening act for the Grateful Dead. At this time Garcia was experimenting with the pedal steel guitar for both NRPS and the Dead.

For the next few years Garcia and the Dead built their reputation based on their live shows. He was a guest performer with other groups. By 1970 the Dead began moving back to their bluegrass, folk and country roots. Garcia began doing solo recordings often accompanied by keyboardist Merl Saunders. In 1973 Garcia was a founding member of the bluegrass supergroup Old and in the Way. Garcia formed the rock band Legion of Mary (band) in 1974. In 1975 he founded the Jerry Garcia Band. It became his most important side project until his death.

By 1974 the Grateful Dead members began to go their own ways. Garcia continued making solo albums and appearances. The Dead began touring again in 1976. In 1986, while on tour with Tom Petty and the Heartbreakers and Bob Dylan, Garcia collapsed. He went into a diabetic coma and was hospitalized. Garcia returned to touring with the Dead. In 1987 the Grateful Dead had their first Top-10 hit, Touch of Grey.

On August 9, 1995, after years of health problems, Jerry Garcia died of heart failure. He was 53 years old.

All content from Kiddle encyclopedia articles (including the article images and facts) can be freely used under Attribution-ShareAlike license, unless stated otherwise. Cite this article:
Jerry Garcia Facts for Kids. Kiddle Encyclopedia.