Coltrane played the bebop and hard bop styles of jazz early in his career, and helped start the use of modes in jazz and later was a very important part of free jazz. He made about fifty recordings as a bandleader, and appeared on many other albums, for example with trumpeter Miles Davis and pianist Thelonious Monk. As his career progressed, Coltrane's music became more spiritual. His second wife was pianist Alice Coltrane, and their son Ravi Coltrane is also a saxophonist.

He influenced many musicians, and is one of the most important tenor saxophonists in jazz history. He got many awards, including Special Citation from the Pulitzer Prize Board in 2007 (many years after his death) for his "masterful improvisation, supreme musicianship and iconic centrality to the history of jazz." 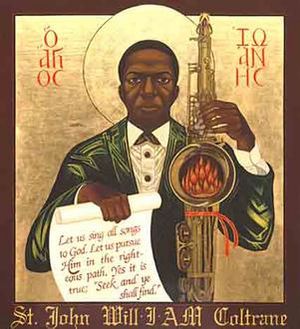 Coltrane died of liver cancer at Huntington Hospital on Long Island on July 17, 1967, at the age of 40. His funeral was held four days later at St. Peter's Lutheran Church in New York City. The service was opened by the Albert Ayler Quartet and closed by the Ornette Coleman Quartet. Coltrane is buried at Pinelawn Cemetery in Farmingdale, New York. Coltrane's death surprised many in the musical community who were not aware of his condition. 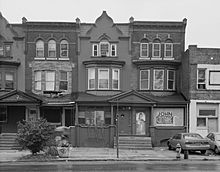 The influence Coltrane has had on music spans many genres and musicians. Coltrane's massive influence on jazz, both mainstream and avant-garde, began during his lifetime and continued to grow after his death. He is one of the most dominant influences on post-1960 jazz saxophonists and has inspired entire generations of jazz musicians.

In 1965, Coltrane was inducted into the Down Beat Jazz Hall of Fame. In 1972, A Love Supreme was certified gold by the RIAA for selling over half a million copies in Japan. This album, as well as My Favorite Things, was certified gold in the United States in 2001.

In 1982 he was awarded a posthumous Grammy for "Best Jazz Solo Performance" on the album Bye Bye Blackbird, and in 1997 he was awarded the Grammy Lifetime Achievement Award. In 2002, scholar Molefi Kete Asante named Coltrane one of his 100 Greatest African Americans. 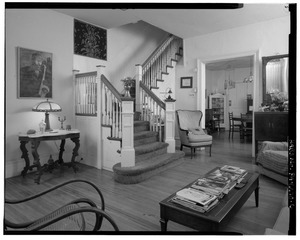 Coltrane was awarded a special Pulitzer Prize in 2007 citing his supreme musicianship and iconic centrality to the history of jazz." He was inducted into the North Carolina Music Hall of Fame in 2009.

The discography below lists albums conceived and approved by Coltrane as a leader during his lifetime. It does not include his many releases as a sideman. 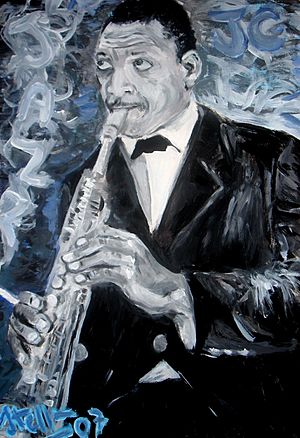 All content from Kiddle encyclopedia articles (including the article images and facts) can be freely used under Attribution-ShareAlike license, unless stated otherwise. Cite this article:
John Coltrane Facts for Kids. Kiddle Encyclopedia.