Kids Encyclopedia Facts
For the hamlet within the Town of Huntington, see Huntington (CDP), New York.

The Town of Huntington is one of ten towns in Suffolk County, New York, United States. Founded in 1653, it is located on the north shore of Long Island in northwestern Suffolk County, with Long Island Sound to its north and Nassau County adjacent to the west. Huntington is part of the New York metropolitan area. As of the 2010 United States census, the town population was 203,264.

Huntington is the only township in the United States to ban self-service gas stations at the township level. Huntington is among the few places in the U.S. where full-service gas stations are compulsory and no self-service is allowed. The entire state of New Jersey and the western-Mid Valley portion of Oregon are the only other places in the country with similar laws.

In 1653, three men from Oyster Bay, Richard Holbrook, Robert Williams and Daniel Whitehead, purchased a parcel of land from the Matinecock tribe. This parcel has since come to be known as the "First Purchase" and included land bordered by Cold Spring Harbor on the west, Northport Harbor on the east, what is now known as Old Country Road to the south and Long Island Sound to the north. The three men immediately turned the land over to the white settlers who had already been living there. 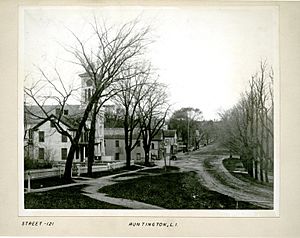 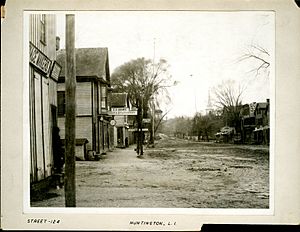 From that initial settlement, Huntington grew over subsequent years to include all of the land presently comprising the modern Towns of Huntington and Babylon. The southern part of the town was formally separated to create Babylon in 1872.

Because Huntington was populated largely by English settlers, unlike the rest of the New Amsterdam colony, the town voted in 1660 to become part of the Connecticut colony rather than remain under the authority of New Amsterdam. It was not until the British gained control of New Amsterdam in 1664 (renaming it New York) that Huntington was formally restored to the jurisdiction of New York.

Following the Battle of Long Island during the American Revolutionary War, British troops used Huntington as their headquarters, and remained encamped there until the end of the war.

The arrival of the Long Island Rail Road in 1867 transformed the economy of Huntington from primarily agriculture and shipping (based on its well protected harbor) to tourism and commuting. Cold Spring Harbor became a popular summer resort.

The end of World War II brought about an explosive growth of population in Huntington, as in the rest of the region. Farms and resorts gave way to homes, and Huntington has transformed into a major bedroom community for nearby New York City.

The Town of Huntington is served primarily by Huntington Area Rapid Transit bus routes, though some routes from Suffolk County Transit also serve the town.

Sbarro's headquarters were located in Melville in the Town of Huntington until 2015.

In 1997, Aer Lingus announced that it was moving its North American headquarters from Manhattan to Melville; James Lyndon, a spokesperson for the airline, said that the company moved to Long Island in an effort to reduce costs, as leasing costs are lower on Long Island than in Manhattan. The move would transfer 75 employees, including administrative personnel, marketing personnel, sales personnel, and telephone reservation agents. The airline planned to move on June 15, 1997. The airline had also considered sites in Boston and in Westchester, New York.

According to Huntington's 2016 Comprehensive Annual Financial Report, the top employers in the town are:

Huntington is home to two universities and colleges, including:

Note: Some schools in the Commack School District are located in the Town of Smithtown.

All content from Kiddle encyclopedia articles (including the article images and facts) can be freely used under Attribution-ShareAlike license, unless stated otherwise. Cite this article:
Huntington, New York Facts for Kids. Kiddle Encyclopedia.