Islip ( EYE-slip) is one of ten towns in Suffolk County, New York, United States. Located on the south shore of Long Island, the town population was 335,543 at the 2010 census, it is the fourth most populous City or Town in the state.

Precipitation averages 46.2 inches (1,170 mm) annually, and is somewhat evenly distributed throughout the year, though March and April are the wettest months in terms of total precipitation. Snowfall averages 24.8 inches (63 cm) per winter, falling almost entirely from December to March. As is typical of Long Island, snow cover does not usually remain for long, with an average of 20–21 days per winter with snow cover of at least 1 inch (2.5 cm).

Matthias Nicoll relocated to New York from Islip, Northamptonshire, England, in 1664. His son, William Nicoll, became a royal patentee of the east end of what is now the Town of Islip, and his domain reached from East Islip to Bayport and included Sayville, West Sayville, Oakdale, Great River, Islip Terrace, Central Islip, Hauppauge, Holbrook, Bohemia, Brentwood, Holtsville and a portion of Ronkonkoma. All of this land was bought from Winne-quaheagh, Sachem (chief) of Connetquot in 1683. The yearly fee paid to Governor Thomas Dongan of New York was five bushels of quality winter wheat or 25 shillings. Other early land patentees were Andrew Gibb (Islip Hamlet), John Mowbray (Bay Shore, originally Awixa), Stephan Van Cortlandt (Sagtikos Manor), and Thomas Willets (West Islip).

By 1710, the colonial government passed an act to enable the precinct of Islip in the County of Suffolk to elect two assessors, a collector, a constable and a supervisor. The people had a voice. Growth, however, remained at a standstill until the Revolutionary War ended when, in the 17 years that followed, there was more progress than in the 50 years preceding. This activity was partly due to the impact of American shipping.

By 1825, it was necessary to install a Fire Island light across the Great South Bay and regular ferry service between Bay Shore and Fire Island began in 1862. In 1867[?] the Long Island Rail Road came to Islip and the first depot was built. People were discovering Islip and the tourist trade soon took hold.

Tourism brought much wealth into the area and business spung up to service the hotels that began to dot the landscape. Some of those tourists stayed on and built summer homes, thus the vacationers and the town seemed to enjoy a mutual prosperity. But the old guard was changing. Early in the 20th century, diesel-powered ferries replaced the whale boats while housing developments and small manufacturing firms sprang up on the sites of old farms. Like the rest of the country, Islip and all of Long Island suffered during the Stock Market Crash and the Great Depression. When the veterans returned home from World War II, there was a housing shortage in New York City, but a rebirth on Long Island. Within a decade following the end of the war, Islip began to turn from a bucolic farming community into a bustling suburb, becoming what was once described as a "bedroom" of New York City. The influx of people was tremendous - from 71,000 in 1950 to 280,000 in 1970. Then, as growth continued eastward on Long Island, the pace in Islip slowed. 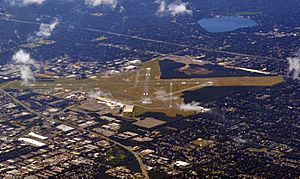 Long Island MacArthur Airport from the air in 2010.

Long Island MacArthur Airport and the New York Air Route Traffic Control Center, located in the Town of Islip, are both in the hamlet of Ronkonkoma. A smaller rural airport known as Bayport Aerodrome also exists within the town used for antique aircraft.

The Long Island Rail Road's Montauk Branch is one of two lines running through the town spanning between the Village of Babylon and the Hamlet of Blue Point in the Town of Brookhaven, with stations from Bay Shore through Sayville. The other line is the Main Line which runs through the northern part of the town with stations in Brentwood, Central Islip and Ronkonkoma, which not only serves as a major transportation hub, but is also located on the Islip-Brookhaven Town Line.

The Town of Islip is served entirely by Suffolk County Transit bus routes.

Passenger ferries depart to Fire Island from Bay Shore and Sayville, which lead to communities both in the Towns of Islip and Brookhaven. Bay Shore has terminals for Fire Island ferries, serving Atlantique, Dunewood, Fair Harbor, Kismet, Ocean Bay Park, Ocean Beach, Saltaire, and Seaview, and smaller hamlets. They are located at the southernmost end of Maple Avenue. Some daily ferries to Atlantique also make a stop at the Bay Shore Marina, which is across the canal from the Maple Avenue ferries.

Sayville's ferry terminals lead to the communities of Cherry Grove and Fire Island Pines, both popular vacation communities for LGBT New Yorkers, as well as to Sailors Haven, which is located within the Sunken Forest Visitor's Center.

All content from Kiddle encyclopedia articles (including the article images and facts) can be freely used under Attribution-ShareAlike license, unless stated otherwise. Cite this article:
Islip, New York Facts for Kids. Kiddle Encyclopedia.