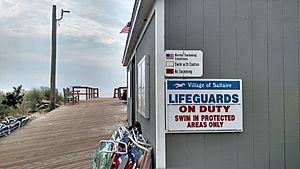 Saltaire is a village on Fire Island in the southern part of the Town of Islip in Suffolk County, New York, United States. The year-round population was 37 at the 2010 census, which, as a summer beach community, increases many times over in the summer.

The village was heavily damaged and six residents killed in the Hurricane of 1938.

In early 2009 the village underwent a beach restoration project.

The village sustained damage by Hurricane Sandy in 2012.

An individual has three ways to get to the community (and the island in general). One could ride the Fire Island Ferries, arrive by private boat or travel by car (restricted). Use of the ferries is by far the most popular means of getting to Saltaire. It is also possible to reach Saltaire by foot or bicycle from other Fire Island communities, by one of the inland walks or on the beach. 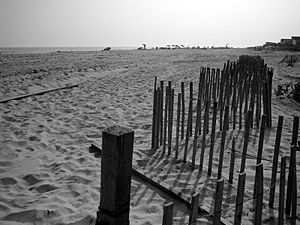 The village is located on the western part of Fire Island between the Great South Bay and the Atlantic Ocean and between the hamlets of Kismet (to the west) and Fair Harbor (to the east).

There are 459 housing units in the community, as well as a Village Hall and Court, general market, Fire House, two churches, and a members yacht club.

Saltaire is the second largest Fire Island community, and it is situated on the widest area on the Fire Island (approximately one-half mile). Fire Island Ferry service to Saltaire leaves from the Bay Shore Fire Island ferry terminal.

Saltaire, like most of Fire Island's communities, consists of boardwalks, concrete walks, and sand paths. Not many full-sized cars are found on the roads. Bicycles are the main form of transportation.

The Saltaire Yacht Club, founded in 1911, underwent rebuilding in winter 2015 due to damage from Hurricane Sandy. All property owners and renters in the village are eligible to join. The club has five Har-Tru tennis courts which can be used by tennis members and their house guests. In addition, it has a bar and the only restaurant in the village which serves dinner six nights a week for its members. Each summer it offers a wide variety of activities and in the past has featured Broadway comedians, singers and entertainers. The club owns a fleet of boats and offers sailing lessons to children during the week. Adult members may take private sailing lessons on the weekend, and competent sailors are permitted to use the club boats. Approximately 250 of the 400 households in the village are members of the club. The club and the village are separate organizations but work closely together. The club allows the village to host its annual Labor Day show put on by the children in the village, show children's movies once a week, and use the club for other activities during the summer.

All content from Kiddle encyclopedia articles (including the article images and facts) can be freely used under Attribution-ShareAlike license, unless stated otherwise. Cite this article:
Saltaire, New York Facts for Kids. Kiddle Encyclopedia.