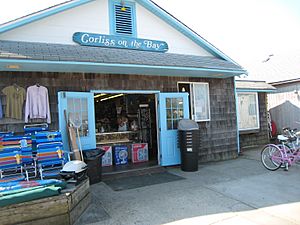 Corliss on the Bay at the bayfront in Fair Harbor.

Fair Harbor is a small community hamlet located near the western end of Fire Island. It is a part of the Town of Islip on Long Island, New York. With approximately 350 homes within its 13-block town limits, the town features a few stores, a restaurant and a pizza shop, giving it old-style charm with the security of a state-of-the-art Fire Department and EMS. Moreover, the beach is wide, and the bay front is active.

Fair Harbor is a seasonal beach community. Many of the homes have been passed down from generation to generation. Most houses were built in the 1970s, but few of the homes date back to the 1940s. The town has a strong summer rental market, with most houses renting for the entire summer season or by the month. During the off-season there is limited car access to Fire Island while during the summer there is no car access and the town can only be reached by ferry or private boat. Biking and walking are the main modes of transportation. Fair Harbor falls under the police jurisdiction of Suffolk County Marine Bureau and is protected by its own volunteer fire department, the Fair Harbor Fire Department, founded in 1931. During the summer months lifeguards are stationed on both the bay beach and ocean beach. 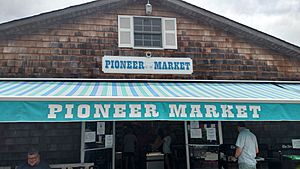 Fair Harbor is located on the western part of Fire Island between the Great South Bay and the Atlantic Ocean. It is about 47 miles by car to the ferry dock in Bay Shore, NY. From there, it is six miles by ferry across the water to Fair Harbor. Saltaire is the Incorporated Village immediately west of Fair Harbor while Dunewood and Lonelyville are directly to the east. To get to Fair Harbor, take the ferry from Bay Shore.

Being a seasonal community, Fair Harbor offers only a few services. The Pioneer Market is the only grocer in the hamlet; Le Dock, the only restaurant, is open for lunch and dinner and offers both indoor and outdoor dining. The Loading Dock sells liquor and wine, and Corliss on the Bay sells miscellaneous items including bikes, souvenirs, hardware, toys, magazines, books, paint, and garden items. There is also an ice cream store and a pizza take-out shop. These stores are open 7 days a week in season and closed during the off season (October through May). There is also the Fair Harbor Clothing store, established by individuals who grew up a block away from Fair Harbor "in a barefoot community," developing a "deep appreciation for the water, waves and bounty of the sea."

All content from Kiddle encyclopedia articles (including the article images and facts) can be freely used under Attribution-ShareAlike license, unless stated otherwise. Cite this article:
Fair Harbor, New York Facts for Kids. Kiddle Encyclopedia.