West Sayville is a hamlet and census-designated place (CDP) in Suffolk County, New York, United States. It had a population of 5,011 at the 2010 census.

The median household income was reported as $95,938 by the U.S. Census Bureau with 93.3% holding a high school education.

The Long Island Maritime Museum is located at 86 West Avenue in West Sayville.

Town of Islip parks include the Division Avenue Park/Playground on the street it was named after, the West Avenue Docks and the Baymen Soccer Complex on Cherry Avenue. 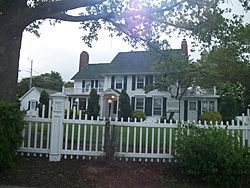 The Greene House is located at 93 Montauk Highway. George Washington stopped at this historic house during a tour of Long Island to rest and refresh himself and his horses in 1790.

Edith Corse Evans, heir to a hide-tanning and real estate fortune with a West Sayville summer home, was a passenger on the Titanic. During the sinking of the Titanic on April 15, 1912, Edith Corse Evans gave up the last seat on the last lifeboat to save a mother of six children. Evans lost her life after the ocean liner sunk into the Atlantic Ocean, but her efforts saved Caroline Brown from Acton, Massachusetts.

The West Sayville Radio Station at Cherry Avenue was a German Telefunken wireless transmitter built in 1912 to broadcast primarily to Germany. In 1915 the transmitter allegedly relayed a message from the German Embassy to "get Lucy", referring to the RMS Lusitania which was sunk on May 15. Whether the signals coming from the transmitter in Sayville authorized the attack or not, they caused concern for the US government, which was raised again when it was used in the transmission of the Zimmermann Telegram by Germany to Mexico to request their assistance in the invasion of the United States during World War I. This historic transmission was sent through the West Sayville Radio Station on January 16, 1917, and President Woodrow Wilson sent a contingent of Marines to seize the wireless station in order to ensure that no further encrypted messages were sent. This was the first hostile action taken by the United States against Germany during World War I. Today the land where the transmitter was located is part of the Sayville National Wildlife Refuge.

All content from Kiddle encyclopedia articles (including the article images and facts) can be freely used under Attribution-ShareAlike license, unless stated otherwise. Cite this article:
West Sayville, New York Facts for Kids. Kiddle Encyclopedia.