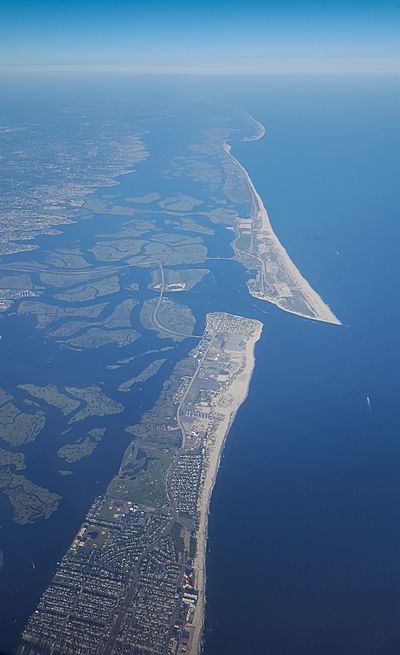 The South Shore of Long Island, in the U.S. state of New York, is the area along Long Island's Atlantic Ocean shoreline. Though some consider the South Shore to include parts of Queens, particularly the beach communities in the Rockaways such as Belle Harbor, the term is generally used to refer to the Long Island coastline in Nassau and Suffolk counties. It is often used as a generic name for the entire southern half of Long Island rather than just the area immediately adjacent to the coastline.

The South Shore tends to be diverse in culture and income as it varies from one hamlet or village to another. In Suffolk County, there still remains pockets of old money from the Gilded Age, including the country seats of families from the Vanderbilts, Havemeyers, and Bournes to the Gardiners, Bayard-Cutting as well as many others. The South Shore is also home to the world-renowned seaside resort of The Hamptons on its east end, located on the South Fork of Long Island. On its west end, bordering Queens, the Five Towns retains pockets of affluence similar in character to the Gold Coast of the North Shore and The Hamptons.

In approximate west to east order:

All content from Kiddle encyclopedia articles (including the article images and facts) can be freely used under Attribution-ShareAlike license, unless stated otherwise. Cite this article:
South Shore (Long Island) Facts for Kids. Kiddle Encyclopedia.