Kids Encyclopedia Facts
Not to be confused with Stoke-on-Trent, referred to as "Five Towns" in Arnold Bennett's novels.
For the location in Yorkshire, see City of Wakefield. For the College, see Five Towns College. 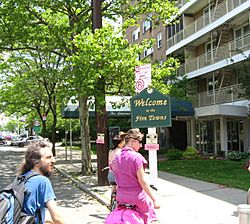 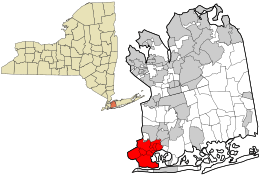 The Five Towns is an informal grouping of villages and hamlets in Nassau County, United States on the South Shore of western Long Island adjoining the border with Queens County in New York City. Although there is no official Five Towns designation, "the basic five are Lawrence, Cedarhurst, Woodmere, Hewlett and Inwood." Each of these "towns" has a consecutive stop on the Far Rockaway Branch of the Long Island Rail Road. All five communities are part of the Town of Hempstead. Woodmere is the largest and most populous community in the Five Towns, while Inwood is the second largest community in the Five Towns.

The area also includes some unincorporated communities and two tiny villages, Hewlett Bay Park and Woodsburgh, that are not added to the final total. Despite the name, none of these communities is a town. The Five Towns is usually said to comprise the villages of Lawrence and Cedarhurst, the hamlets of Woodmere and Inwood, and "The Hewletts,” which consist of the villages of Hewlett Bay Park, Hewlett Harbor, and Hewlett Neck, and the hamlet of Hewlett, along with Woodsburgh.

There is no official Five Towns designation.

Each of these "towns" has a consecutive stop on the Far Rockaway Branch of the Long Island Rail Road. All five communities are part of the Town of Hempstead. Woodmere is the largest and most populous community in the Five Towns. The Five Towns is known regionally for its collection of wealthy villages and hamlets. The area is one of the wealthiest in New York State. It has one of the highest percentages of Jewish residents in the nation.

Despite the Five Towns' regional reputation for wealth and demographic homogeneity, Inwood is both significantly lower income and significantly more diverse than the other four communities, with African-American and Hispanic populations of more than 25 percent each.

There are two school districts in the Five Towns, the Lawrence Public Schools (District 15) and the Hewlett-Woodmere School District (District 14). Roughly speaking, the Lawrence school district contains all of Lawrence, Cedarhurst and Inwood, and parts of Woodmere, North Woodmere, and Woodsburgh, while the Hewlett-Woodmere district contains all of Hewlett and part of Woodmere and extends partly into the neighboring villages of Lynbrook and Valley Stream (North Woodmere and Gibson in particular).

In addition there are many private schools in the Five Towns, some of these are: HAFTR, HALB, the Lawrence Woodmere Academy, Yeshiva of South Shore and many others.

Although Lawrence was planned to be the location for Five Towns College, the original site was no longer available by the time the school received its charter in 1972. The college is currently located in Dix Hills, Suffolk County. Other than the proposed original site, the school never had a physical connection to the Five Towns.

Notable current and former residents of the Five Towns include:

All content from Kiddle encyclopedia articles (including the article images and facts) can be freely used under Attribution-ShareAlike license, unless stated otherwise. Cite this article:
Five Towns Facts for Kids. Kiddle Encyclopedia.