Aerial view; the left half is Atlantic Beach 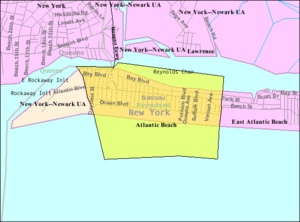 Atlantic Beach is a village located off the South Shore of Long Island in the Town of Hempstead, Nassau County, New York, United States. As of the 2020 United States Census, the village population was 1,707.

The Incorporated Village of Atlantic Beach is located on Long Beach Barrier Island, one of the outer barrier islands which it shares with Long Beach, East Atlantic Beach, Lido Beach and Point Lookout.

During the summer months, the population swells by thousands as people flood the beaches and the summer residents move in. Atlantic Beach residents may obtain season passes and access the beaches through nine entrances. It has been described as the "Genuine 'Old New York' paradise". 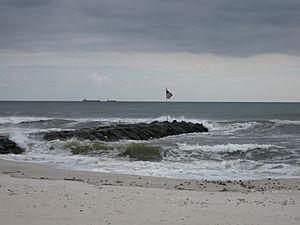 Jetty extending into the Atlantic Ocean

All content from Kiddle encyclopedia articles (including the article images and facts) can be freely used under Attribution-ShareAlike license, unless stated otherwise. Cite this article:
Atlantic Beach, New York Facts for Kids. Kiddle Encyclopedia.