Cedarhurst is a village in the Town of Hempstead in Nassau County, on the South Shore of Long Island, in New York, United States. The population was 6,592 at the 2010 census.

The Incorporated Village of Cedarhurst is located in the region of Long Island's South Shore known as the Five Towns.

The village was incorporated in 1910. It is part of the "Five Towns", together with the village of Lawrence and the hamlets of Woodmere and Inwood, and "The Hewletts", which consist of the villages of Hewlett Bay Park, Hewlett Harbor and Hewlett Neck and the hamlet of Hewlett, along with Woodsburgh.

Cedarhurst's early name was Ocean Point. Rail service arrived in 1869 which led people to the area, especially to the Rockaway Hunting Club, built in Cedarhurst in 1878. A post office was established in 1884, and Ocean Point was renamed Cedarhurst, partly at the request of the Hunt Club.

For many years, Central Avenue, the area's main business district, was considered the Rodeo Drive of Long Island, offering upscale shops and boutiques to discriminating shoppers from around the area. With the growth of the local Orthodox Jewish community, many stores and restaurants now cater to the needs of this community. As observant Jews do not shop on the Jewish Sabbath, many of the street's businesses are closed on Saturday, reducing the foot traffic for those stores that remain open on Saturdays. 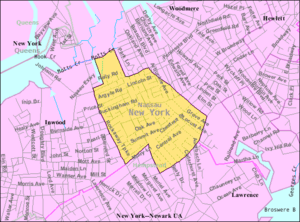 According to the United States Census Bureau, the village has a total area of 0.7 square miles (1.8 km2), all of it land.

Over the past twenty years significant numbers of Orthodox Jewish families have moved into Cedarhurst supporting synagogues and other Jewish organizations. Italian-Americans (15.3%), Russian Americans (10.5%), Polish-Americans (9.7%) and Irish-Americans (6.9%) also make up a large percentage of the Five Towns community.

Cedarhurst is part of School District 15 and is served by the Lawrence Public Schools. Lawrence High School as well as the #5 Elementary School, which serve students from a number of surrounding communities, are located in Cedarhurst.

Cedarhurst is also home to the Hebrew Academy of the Five Towns and Rockaway High School and a Kahal school, both located on Central Avenue.

The town is also home to St. Joachim Church of the Roman Catholic Diocese of Rockville Centre, also on Central Avenue. The church's parish elementary school was closed in June 2005 due to declining enrollment in the school's area over the previous decade.

The Cedarhurst station provides Long Island Rail Road service on the Far Rockaway Branch to Penn Station in Midtown Manhattan and the Atlantic Terminal in Brooklyn. 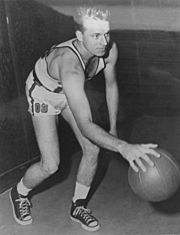 All content from Kiddle encyclopedia articles (including the article images and facts) can be freely used under Attribution-ShareAlike license, unless stated otherwise. Cite this article:
Cedarhurst, New York Facts for Kids. Kiddle Encyclopedia.