Atlantic Terminal (formerly Flatbush Avenue) is the westernmost stop on the Long Island Rail Road's (LIRR) Atlantic Branch, located at Flatbush Avenue and Atlantic Avenue in Downtown Brooklyn, New York City. It is the primary terminal for the Far Rockaway, Hempstead, and West Hempstead Branches. The terminal is located in the City Terminal Zone, the LIRR's Zone 1, and thus part of the CityTicket program.

The station was originally named Brooklyn in 1852, twenty years after the line was established as the Brooklyn and Jamaica Railroad, and was not originally a terminus. The original terminus was South Ferry. When LIRR subsidiary New York and Jamaica Railroad built a new line between Hunter's Point and Jamaica in 1861, the main line was relocated there, and the line was abandoned west of East New York, in compliance with Brooklyn's ban on steam railroads. West of East New York, the tracks were taken over by horse car lines.

The Brooklyn station designation was replaced by the Flatbush Avenue station on July 2, 1877. That same summer local Atlantic Avenue rapid transit trains began to stop there on August 13. The old depot was renovated between July–August 1878, when it began serving the Brooklyn, Flatbush and Coney Island Railroad. It was rebuilt again in June 1880. The headquarters for the Long Island Express Company was installed there in 1882, and gave the station a series of tracks that would later be known as the "EX Yard." In 1888, the Union Elevated Railway built an elevated railway line and station that connected to the LIRR station, which was better known as the Atlantic Avenue (BMT Fifth Avenue Line). The Union Elevated eventually became part of the Brooklyn-Manhattan Transit Corporation. Further rebuilding took place again in 1893.

Between 1904 and 1906, the Carlton Avenue Freight Yards were replaced by the Vanderbilt Avenue Freight Yards. This was just a portion of a major improvement project that included the complete reconstruction of the station. The second depot opened on April 1, 1907 with the depot at street level and the tracks installed underground. The station had a lobby that was larger than most LIRR stations, and contained subway type entrances to the tracks. It also served as a post office building until 1925, and contained a baggage depot, express buildings, some meat houses which were inherited from the previous version of the station, and a merchandise terminal for "less than carload freight" added on in 1908. The Interborough Rapid Transit Company built a subway line called the Eastern Parkway Line and a station on Atlantic Avenue, that connected to the station on May 1, 1908. The BMT also built two more subway lines on Pacific Street along the Fourth Avenue Line on June 22, 1915, and Atlantic Avenue along the Brighton Line on August 1, 1920. The connection to the BMT Fifth Avenue Line was lost on May 31, 1940. 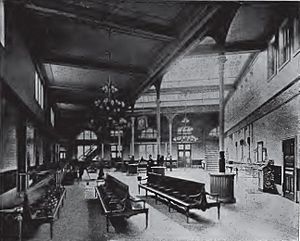 The station was refurbished and the exterior was sandblasted in the early 1940s. The decline of rail service after World War II led to the station's gradual demise, however. Track #1 was out of service on April 10, 1959. Former express tracks numbers 9-14 ("EX" Yard) were taken out of service on March 3, 1971. At some point, the express buildings became a parking garage. Local businesses were still allowed to utilize the station, such as a barber shop, restaurants, candy stores, a snack bar, a podiatrist's office, a dental office, a beauty school, and even a row of telephone booths. Those businesses were gone by 1978. The tracks that were originally numbered from south to north were renumbered from north to south on July 1, 1978. Despite efforts to repaint the lobby in the early-1980s, random vandalism plagued the station interior causing water damage that was so severe, the street level depot was closed in 1988, and portions were razed during the 1990s.

On January 5, 2010, a new entry pavilion, designed by di Domenico + Partners, opened, providing improved connections between the LIRR, subways, and buses. In March 2010, the station was renamed Atlantic Terminal after a six-year reconstruction project, during which trains continued to operate.

In 2014, the LIRR announced that service from Babylon and Hicksville will go directly to Atlantic Terminal during New York Islanders games at Barclays Center. Passengers would normally have to transfer at Jamaica to go to Babylon or Hicksville. However, in preparation for East Side Access project, most service to Atlantic Terminal will be provided by a high-frequency shuttle service to and from Jamaica.

The LIRR terminal, one floor below the ground level, has three high-level island platforms adjacent to six tracks. Platform A is ten cars long, but the two easternmost cars on Track 1 are not accessible due to a large gap between the train and the platform. Platform B is eight cars long. Platform C is six cars long, but Track 6 only has enough space for four cars to meet the platform as it is adjacent to the northbound local platform of the IRT Eastern Parkway Line.

The rail terminal is adjacent to and below the Atlantic Terminal mall and near the Barclays Center, Brooklyn Academy of Music and the Williamsburgh Savings Bank Tower, as well as Brooklyn Technical High School.

The massive Pacific Park residential, commercial and sports complex, which includes Barclays Center, is being built near the station and above its yard tracks.

All content from Kiddle encyclopedia articles (including the article images and facts) can be freely used under Attribution-ShareAlike license, unless stated otherwise. Cite this article:
Atlantic Terminal Facts for Kids. Kiddle Encyclopedia.