Atlantic Avenue–Barclays Center (formerly Atlantic Avenue/Pacific Street) is a New York City Subway station complex shared by the BMT Fourth Avenue Line, the BMT Brighton Line and the IRT Eastern Parkway Line, located at Atlantic, Fourth, and Flatbush Avenues and Pacific Street in Downtown Brooklyn. The complex is served by the 2, 4, D, N, Q and R trains at all times; the 3 train at all times except late nights; the 5 and B trains during weekdays; and a few rush-hour W trains. 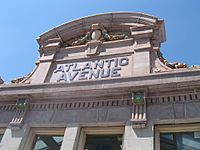 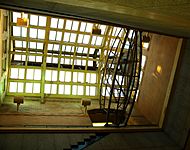 The IRT Eastern Parkway Line station was built first, in 1908, the terminal of a four-stop subway extension from Lower Manhattan to Downtown Brooklyn via the Joralemon Street Tunnel. The station's control house, a grand, ornate entrance to what was then the terminal of the Interborough Rapid Transit Company's Brooklyn lines, was designed by Heins & LaFarge, who also built the Cathedral of St. John the Divine in Morningside Heights, Manhattan. This control house was listed on the National Register of Historic Places in 1980; however, the actual entrance is now removed and now serves as a skylight into the IRT station.

In 1909, to address overcrowding, the New York Public Service Commission proposed lengthening platforms at stations along the original IRT subway. On January 18, 1910, a modification was made to Contracts 1 and 2 to lengthen station platforms to accommodate ten-car express and six-car local trains. In addition to $1.5 million (equivalent to $34.2 million in 2018) spent on platform lengthening, $500,000 (equivalent to $11,396,429 in 2018) was spent on building additional entrances and exits. It was anticipated that these improvements would increase capacity by 25 percent. The island platform at the Atlantic Avenue station on the modern Eastern Parkway Line was extended 105 feet (32 m) to the east. On January 23 and 24, 1911, ten-car express trains began running.

The station was overhauled in the late 1970s. The Metropolitan Transportation Authority (MTA) fixed the station's structure and overhauled its appearance. It refurbished the wall tilings and replaced the old signs and incandescent lighting with modern fixtures. It also fixed the staircases and platform edges. On January 16, 1978, the ex-IRT and ex-BMT stations were connected into a single station complex, eliminating a "double fare" that formerly was required to transfer between the Atlantic Ave. IRT/BMT platforms and the Fourth Ave. BMT side of the station.

The station complex underwent another major overhaul from 1999 to 2003, using funds from the 1987 capital program; the $49 million in funding from that program had been delayed in 1994 due to the MTA's budget issues. This time the station received state of the art repairs and was updated for ADA-accessibility, with the installation of eight elevators in the station, as well as the widening or construction of fifteen staircases. The MTA repaired the staircases, re-tiled the walls and floors, upgraded the station's lights and the public address system, installed ADA yellow safety threads along the platform edge, installed new trackbeds for local and express trains entering the IRT station, and widened the 100-year-old passageways between the stations. An escalator was replaced at Hanson Place, the kiosk on Times Plaza was rehabilitated , and a new station entrance was added at Hanson Place. To achieve this, the entire IRT station had to be supported by large 36-foot-long (11 m) crossbeams hanging from the roof of the station box, a construction technique that had never been used previously; the station was also supported by conventional columns from below. The entire feat raised the subway infrastructure under Flatbush Avenue, as well as the avenue itself, by less than an inch while the 350-foot-long (110 m) passageways were widened from 15 to 42 feet (4.6 to 12.8 m). In 2004, the entire station was made a NRHP landmark. Late that year, the MTA installed elevators on both sides of the platform and street level to accommodate wheelchairs and those with disabilities.

In June 2009, the MTA sold the naming rights of the station complex to Forest City Ratner Companies for 20 years at $200,000 per year, one of the few such renames in the system (Willets Point–Shea Stadium, in Queens, was another example of a station with such naming rights, until the MTA simply renamed it to Mets–Willets Point following Shea Stadium's demolition). Barclays Center, whose naming rights were bought by Barclays Bank, opened September 2012 and is part of Forest City Ratner Companies' Pacific Park project. As a result, the station was renamed to its present name, Atlantic Avenue–Barclays Center, in May 2012. A new mezzanine and fare control area was built near the sports complex. Following this rename and the addition of a new exit, the MTA has considered selling the naming rights of other subway stations.

To the Fourth Avenue portion of the complex:

To the Eastern Parkway/Brighton portion of the complex:

Atlantic Avenue–Barclays Center (originally Atlantic Avenue) is an express station on the IRT Eastern Parkway Line which has four tracks, one island platform, and two side platforms. On the center platform, there are two old indicator signs which mark the next train, formerly used for non-rush hour short turn trains. An old style sign to the Brooklyn Academy of Music also exists. The trackway to the Long Island Rail Road Atlantic Branch is still visible at the north end of the northbound local track, although much of it is behind corrugated wall; more information about this and other unused trackways is at Bergen Street. The LIRR Atlantic Terminal platforms, slightly lower, are clearly visible through floor-to-ceiling railings.

The IRT Eastern Parkway Line platform has a passageway to the BMT Fourth Avenue and Brighton Lines under the platforms, with the Fourth Avenue Line to the southwest and the Brighton Line to the northeast. Another passageway between the Eastern Parkway and Brighton Line is present at the south end of the station, which also leads to an exit immediately adjacent to Barclays Center. The Barclays Center exit features a part-time booth that is staffed during events at the arena and two escalators.

Although the station is wheelchair accessible, the Eastern Parkway Line express platform was formerly too narrow in some areas to accommodate wheelchairs. Passengers were notified of this fact by announcements on trains before reaching the station. The stairs have since been trimmed in width to allow full wheelchair access.

North of this station, there is an unused trackway, splitting from the southbound local track for a proposed subway under Fourth Avenue (later built as the BMT Fourth Avenue Line). It merges with the Manhattan-bound express track and ends on a bumper block between the two express tracks at Nevins Street. When this station originally opened in 1908 it was the terminal for the line, and had two side platforms, an island platform, and two tracks. All the platforms were connected together at their southern ends.

This station is one of three express stations to have side platforms for local services and a center island platform for express services, the other two being the 34th Street–Penn Station stops on the IND Eighth Avenue Line and the IRT Broadway–Seventh Avenue Line respectively. The reason for this is that the Atlantic Avenue station was originally planned as a two-track station with only the island (express) platform; the side (local) platforms were added to the plans when construction was already underway. However, this layout helps to reduce overcrowding because the station is connected to Atlantic Terminal, and the next station west from Atlantic Avenue, Nevins Street, is also an express station with the more common two-island-platform configuration. This limits overcrowding by preventing cross-platform interchanges between local and express services.

The platform has seven staircases, three to the main mezzanine, two to the Hanson Place exit at the north end, which is an escalator that leads to a separate mezzanine with no transfers to the other lines and two at the south end, which leads to both an exit immediately adjacent to Barclays Center and another mezzanine that connects to the IRT platforms. The Barclays Center exit features a part-time booth that is staffed during events at the arena and two escalators.

The street staircase on the Hanson Place mezzanine leads to the Williamsburgh Savings Bank Tower. The exit at Hanson Place once had a booth that has since been removed. The lower level of this mezzanine had a passageway, now sealed, that ran above the platform from Hanson Place. The "To Hanson Place" and other signs are covered up. This area is now space used by MTA employees with the entrance at the other side.

The main mezzanine also has an out-of-system passageway to the LIRR's Atlantic Terminal and the full-time fare control at the IRT side of the station. Two of the street staircases lead to the Atlantic Terminal Mall. Lightboxes with rotating content line these walls. There is a removed staircase in between the two sets of stairs. The northernmost staircase was added during renovation, while the other two staircases were narrowed in order to comply with ADA guidelines regarding minimum 36-inch width clearances.

North of this station, a bellmouth is visible from a Manhattan-bound train. The bellmouth was for the proposed Ashland Place Connection which would have connected to the now-demolished BMT Fulton Street El.

At the north end of the BMT Fourth Avenue platforms, two staircases and one elevator go up to the main fare control area, where a turnstile bank provides access to/from the station and two staircases going up to either northern corners of Pacific Street and Fourth Avenue. The northeast corner also has an elevator going down to the mezzanine. A pathway connects to the rest of the complex.

On June 25, 1923 two cars of a train coming from 65th Street Terminal derailed and fell towards Flatbush Avenue. Eight passengers died and many were injured. With increased use of the subways compared to the elevated lines, and the completion of the unification of the city's three subway systems, the Fifth Avenue Line was closed at midnight on June 1, 1940, and was demolished in 1941.

This is a three-part art installation made by George Trakas for the 2004 renovation of the station.

All content from Kiddle encyclopedia articles (including the article images and facts) can be freely used under Attribution-ShareAlike license, unless stated otherwise. Cite this article:
Atlantic Avenue–Barclays Center station Facts for Kids. Kiddle Encyclopedia.