Jamaica station is a major hub station of the Long Island Rail Road and is located in Jamaica, Queens, New York City. With weekday ridership exceeding 200,000 passengers, it is the largest transit hub on Long Island, the fourth-busiest rail station in North America, and the second-busiest station that exclusively serves commuter traffic. It is the third-busiest rail hub in the New York area, behind Penn Station and Grand Central Terminal. Over 1,000 trains pass through each day, the fourth-most in the New York area behind Penn Station, Grand Central Terminal and Secaucus Junction.

The Jamaica station is located on an embankment above street level and contains six platforms and ten tracks for LIRR trains. A concourse above the LIRR platforms connects to a station on the AirTrain JFK elevated people mover to John F. Kennedy International Airport, which contains two tracks and one platform. There are also connections to the Archer Avenue lines of the New York City Subway at a separate station directly below. The area just outside is served by several local bus routes, and others terminate within a few blocks of the station.

All LIRR services except the Port Washington Branch pass through Jamaica station. The Main Line westwards leads to Long Island City station in Queens and Penn Station in Manhattan via Woodside, while the Atlantic Branch diverges along Atlantic Avenue to Atlantic Terminal in Brooklyn. Prior to December 2012, the Montauk Branch served one daily trip to Long Island City station via Richmond Hill, Queens. East of Jamaica, these three lines diverge, with some branch services using the Main Line, some using the Atlantic Branch, and some using the Montauk Branch. Because of its central location on all services (except the Port Washington Branch), it is common for commuters to "change at Jamaica", or switch trains to reach their final destination. After the opening of East Side Access in 2023, the southernmost platform at Jamaica will be used primarily by shuttle trains to and from Atlantic Terminal, while through services will continue to Long Island City, Penn Station and Grand Central Terminal.

The present Jamaica station was designed by Kenneth M. Murchison and built between 1912 and 1913 as a replacement for two former stations in Jamaica. The first was the LIRR's original Jamaica Station ("Old Jamaica"), built c. 1836 as the terminus of the LIRR. It was remodeled in 1869 and again in 1872, only to be completely rebuilt between 1882–83 adjacent to and in use concurrently with the original depot. Covered platforms were later installed. 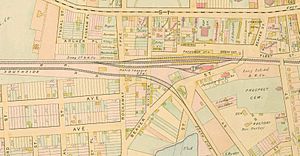 The other station known as Jamaica–Beaver Street was built by the South Side Railroad of Long Island on the Atlantic Branch. It opened on October 28, 1867. It was razed in 1871 and replaced on Christmas Day of the same year. When the LIRR acquired the SSRRLI in 1867, the depot was moved to the south side of Beaver Street crossing on a stub track. Low platforms for this station stop were located on the north side of Beaver Street crossing. Timetables of the period show station stop as "Jamaica" for Atlantic Branch trains bound for Locust Avenue, Springfield, and Valley Stream, as "Old Southern Road" station. From 1908–1913, the station stop was listed as "Jamaica (Beaver Street)."

Both stations were discontinued as station stops. "Old Jamaica" station at what is now 153rd Street (0.4 mile east of the present station) was razed in 1912 with the grade elimination project, the "Jamaica Improvements"; Jamaica–Beaver Street station was razed with the grade elimination in 1913. The 1912–13 "Jamaica Improvement" was the final step in consolidating the branch lines of the LIRR. To the west of the station, Jay Interlocking was built, and to the east, Hall Interlocking was constructed. These interlockings allowed any line to reach any other line, allowing easy transfer between lines at Jamaica station, which is the hallmark of current day LIRR service. No trace of the Jamaica–Beaver Street station exists today.

After the merging of Beaver Street station with the new Jamaica Station, the LIRR built a replacement along the Atlantic/Far Rockaway Branch southeast of the former SSRRLI depot. It was named "South Street station" and was located on what is today South Road between 157th and 159th Streets. Originally the site of the "SJ Tower," which was used to keep trolleys and trains from colliding with one another until the grade crossing was eliminated in 1913, it was built on November 15, 1917. Due to the close proximity to Jamaica Station, the New York Public Service Commission granted them permission to close the station on March 28, 1922. It was finally closed in June of that year.

This station received a $209 million renovation that was expected to be completed in 1994. The project added elevators, new staircases, overhauled platforms, new tracks, a second pedestrian overpass, and a second pedestrian bridge to be located at the eastern end of the station, connecting all the platforms. A lower-level concourse was added to provide additional route for riders. Two connections were added to the new Archer Avenue Line. 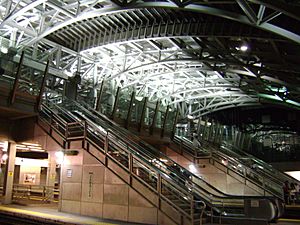 In 2006, the MTA completed a $387 million renovation project, begun in 2001 and carried out in conjunction with the construction of AirTrain JFK's terminal (the Port Authority of New York and New Jersey contributed $100 million toward the project).

The project had two goals: Passenger-oriented renovations included new platforms and pedestrian bridge, a central elevator bank linking the LIRR to the street and to the Sutphin Blvd subway station, a new mezzanine connecting to AirTrain and a new steel and glass canopy over the elevated tracks. The focal point of the project was the Jamaica Control Center, built by Tishman Construction Corporation and Bechtel. The JCC houses the LIRR offices, railroad control center and MTA Police. Overall, the renovations enlarged the station and have made it more modern and efficient, providing easier access to all eight LIRR tracks. The entire station complex, including AirTrain and the subway, is compliant with the Americans with Disabilities Act of 1990 (ADA). The project was named "2006 Project of the Year" by the Long Island branch of the American Society of Civil Engineers. 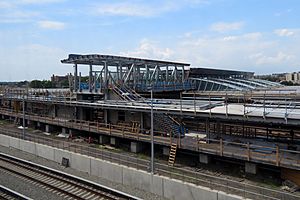 As part of a series of LIRR readiness projects in preparation for the East Side Access extension to Grand Central Terminal, the MTA is redoing track layouts at Jamaica station to straighten train paths and installing high-speed switches. As part of the project, additional ladder tracks will be created, the E Yard track will be extended over 150th Street, the East Layup Track will be converted to be a through route. In addition, most Brooklyn service will be converted into a shuttle service. This shuttle will operate between Atlantic Terminal in Brooklyn and Jamaica via the Atlantic Branch. A new Platform F and dedicated tracks will be constructed south of the existing LIRR platforms at Jamaica station to serve the shuttles; passengers traveling between Brooklyn and Long Island will be required to make a walking transfer between this new platform and the existing platforms.

This reconfiguration will allow for increased service between Brooklyn and Jamaica and between Jamaica and Manhattan and reduce switching maneuvers, while raising average train speeds around Jamaica station from 15 to 30 miles per hour (24 to 48 km/h). Service frequency will increase for trains on the Atlantic Branch–trains will run every 7.5 minutes during rush hours and every 15 minutes during off-peak hours. It will allow for a 40% increase in peak-hour service between Jamaica and Manhattan. However, the project has been criticized because it would eliminate most direct service from Long Island to Brooklyn, thereby increasing commute time between the two destinations.

Completion of Phase I, which includes the new platform, for was originally projected for January 2018. The completion date was later pushed back to July 2019, but as of March 2019[update], is planned to be finished in 2021 at a cost of $380 million. The platform itself was to be completed at the end of 2019, while the track and surrounding infrastructure would be completed in late 2020, and track interlockings would be completed by late 2021. The platform ultimately opened in February 2020 after several delays. Additional improvements, to cost over $1 billion, may be constructed starting as early as 2022; designs for these improvements started in June 2017 and are scheduled to be completed in 2021. 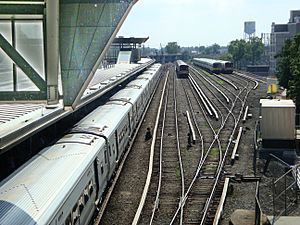 Jamaica is the Long Island Rail Road's hub station. There are six high-level island platforms. Five of them, Platforms A–E, serve tracks 1–8 and are each 1,000 feet (300 m) long, fitting almost 12 cars. Trains on tracks 2 and 7 utilize a Spanish solution boarding layout, as these trains can be entered from platforms on either side, allowing passengers to quickly transfer between three trains at once. During the morning rush westbound trains from three different lines bound for three different terminals are scheduled to arrive at Jamaica simultaneously on tracks 1, 2, and 3. Passengers can cross to the train for their destination by passing through the train on track 2 (or by the stairs). In the evening the process is reversed: trains from three New York terminals destined for three branches arrive on tracks 6, 7, and 8 and allow commuters to cross to the desired outbound train. The middle tracks – 4 and 5 – share a platform which is used during rush hours to allow passengers to transfer to their destination train on the other side of the platform.

The sixth platform, Platform F, serves tracks 11–12 and is shorter than the other platforms. It is located to the south of platforms A–E and is used by Atlantic Terminal-bound trains. Tracks 9–10 are not adjacent to any platforms and can be used by non-revenue passenger trains or by freight trains.

The main entrance to the station, where tickets may be purchased and where waiting areas are located, is a 100-year-old building that also serves as the offices and headquarters of the Long Island Rail Road Company. 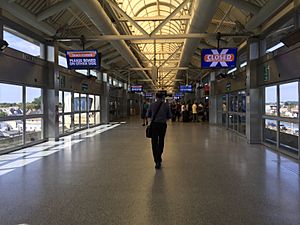 The AirTrain station, located in an enclosed glass structure to the south of the LIRR platforms, has 2 tracks and 1 island platform. It is accessed by escalator or elevator from street level as well as via an enclosed bridge connecting it to the LIRR station. Unlike the LIRR platforms, the AirTrain JFK platforms are entirely enclosed and feature platform screen doors, which help the station maintain a constant temperature and prevent passengers from falling onto the tracks. An array of sensors detect a train's position on the track, and only when it is properly aligned will the train's doors open. This enables the AirTrain to use automatic train operation without drivers.

The platform measures approximately 240 feet (73 m). The next stop to the south is Federal Circle. West of the station the track curves to the left and runs south, above the Van Wyck Expressway. Since it is owned by the Port Authority, it uses a separate fare control from the LIRR. Passengers must pay their fare when either entering or leaving the station, as this station and Howard Beach are the only stations where fares are collected. MetroCard vending machines are located on both sides of fare control.

All content from Kiddle encyclopedia articles (including the article images and facts) can be freely used under Attribution-ShareAlike license, unless stated otherwise. Cite this article:
Jamaica station Facts for Kids. Kiddle Encyclopedia.